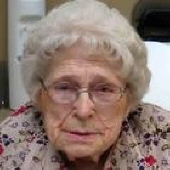 Agnes Carlson, age 99, from Erskine, MN passed away on Thursday, February 11th at Pioneer Memorial Care Center in Erskine. A funeral service to celebrate her life, will be held on Saturday, February 20th at 2:00 PM at Grace Lutheran Church in Erskine with Rev. Timothy Lundeen officiating. Visitation will be held for one hour before the funeral at the church on Saturday afternoon. Interment will be at Fairview Cemetery near Erskine at a later date, and the Carlin-Hoialmen Funeral Home of Erskine is in charge of the arrangements. Messages of condolence may be sent to carlinhoialmen.com.Agnes Carlson was born on June 8, 1916 in Roseau, MN to parents Knute and Alma (Engeberg) Espeseth. She grew up in Roseau where she attended school and continued to help out on the family farm. On April 5, 1952 she was united in marriage to John Carlson, in Thief River Falls, MN. They began farming in Litchville, ND where they farmed for 22 years. After retiring, they moved to the city of Erskine, MN in 1973. There they became members of Grace Lutheran Church where she was involved with the Ladies Mission Circle group and also the GLC Ladies Aid. Agnes loved to cook, bake, sew quilts, and meticulously tend to her lawn and vegetable & flower gardens. She always lived her life according to her father's advice, "Stay close to the Lord!"In 1985 her husband John passed away and Agnes continued to live in their home until 2009, when she moved to Country Place Apartments near Erskine. In 2011, she became a resident of the Pioneer Memorial Care Center where she resided until her death. Agnes passed away there on Thursday, February 11, 2016 at the age of 99 years, 8 months and 3 days.She is survived by her brother Cliff (Dotty) Espeseth of North Eastham, MA and sister Irene Storey of Apple Valley, MN; and several nieces and nephews.She was preceded in death by her husband of 33 years, parents, brothers Clarence, Joe, and Ken Espeseth, and sister Ruth Hagen. Blessed be the memory of Agnes Carlson.

To order memorial trees or send flowers to the family in memory of Agnes Carlson, please visit our flower store.