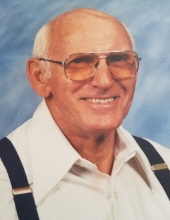 Alvin Myers, age 89, of Las Vegas, NV and formerly of the McIntosh and Fosston area, passed away on Friday, March 22nd, at his daughter's home in Las Vegas. Funeral services will be held at 11:00 a.m. on Saturday, April 6th, at New Journey Church in Fosston. Visitation will be held from 5:00 p.m. to 7:00 p.m. with a 7:00 p.m. prayer service on Friday, April 5th, at the Carlin Funeral Home in Fosston. There will also be reviewal for one hour prior to the service on Saturday, April 6th, at the church. Arrangements are with the Carlin Funeral Home of Fosston and messages of condolence may be sent at www.carlinfuneral.com.Alvin Willis Myers was born in rural Pennsylvania on December 25, 1929 to parents to parents Clifford Isaiah and Leah Elizabeth Whisler Myers.He attended high school in Carlisle, Pennsylvania. When in high school he played guitar in a band and worked as a tire salesman. His pride and joy was a 1938 Ford coupe. Alvin sang in a man's choir in church. It was at one of those practices that Alvin met Mary Catherine Scott because her dad was in the same choir. They married on November 7, 1948. They spent their honeymoon in Alaska in 1967. They lived in an 18-foot trailer for many years. Then due to asthma he had to move to a drier climate moving west settling in Las Vegas, Nevada about 1951. He worked for Ted Weins for a few years and then worked for Richfield at 25th and Owens. He later had a Conoco station at the corner of Las Vegas Blvd. N. and Cary. After having his own business for years he worked as a mechanic at a Exxon at Sahara and Eastern.In 1974, Alvin and Mary bought a farm just outside of McIntosh, Minnesota. He worked at LePier's Oil as a front in man for a while and also farmed. If he wasn't working he was hunting or fishing.Alvin was a member of New Journey, formerly Fosston Baptist Church. When they relocated to their present location he was a trustee and on the building committee. He often sang duets with Pastor Erickson.After having a stroke in 2014 he moved to Las Vegas to live where he resided with his daughter and son-in-law. Alvin went to be with the Lord on March 22, 2019 at his daughter's home in Las Vegas at the age of 89 years. Alvin was preceded in death by his wife, Mary Catherine; his son, Ray Alvin; and his son, Dwayne Richard.Alvin is survived by his daughter, Doris Jean, and her husband Johnny Dean McCracken of Las Vegas Nevada; his daughter, Deborah K, and her husband Nick Paul of Carson City, Nevada; daughter-in-law Doreen Myers of Viking, Minnesota; 7 grandchildren and 8 great-grandchildren and 1 great great grandchild.

To order memorial trees or send flowers to the family in memory of Alvin Myers, please visit our flower store.