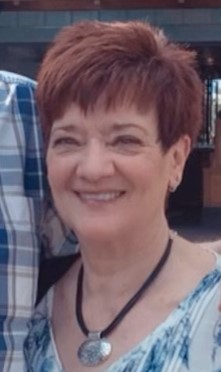 Ann Offerdahl, age 65, of Fosston, MN, passed away unexpectedly on Wednesday, September 22nd, at Mayo St. Mary’s Hospital in Rochester, MN. Funeral services will be held at 11:00 a.m. on Wednesday, September 29th, at Hope Lutheran Church in Fosston with the Rev. Jane Ekholm officiating. Interment will be in Hope Lutheran Cemetery, Fosston. Visitation will be held from 5:00 p.m. to 7:00 p.m. with a 7:00 p.m. prayer service on Tuesday, September 28th, at the Carlin Funeral Home in Fosston. There will also be reviewal for one hour prior to the service on Wednesday at the church. Arrangements are with Carlin Family Funeral Service of Fosston and messages of condolence may be shared at www.carlinfuneral.com. The funeral will be live-streamed on the Carlin website and Facebook page.

Ann Katherine Offerdahl was born on April 19th, 1956, in Minneapolis, Minnesota to parents Joseph and Inez (Wolfe) Lovegreen.  She grew up in Coon Rapids and graduated from Coon Rapids High School in 1974. Following high school, she attended Minneapolis Vo Tech to be a Medical Secretary. After graduation she worked at both Eitel and Children’s Hospitals in Minneapolis.

Ann moved to Bemidji, Minnesota in the early 80s and worked as an Account Representative for KKBJ Radio. While working there she was assigned the account of Bemidji Electronics, which was owned by none other than Jim Offerdahl. After Jim realized he was suddenly spending all his radio advertising money on ads with KKBJ, he figured it would actually save him money if he could convince Ann to work for him. Soon thereafter their relationship bloomed into a romance and Ann ultimately began to work for Jim as his office manager. Jim was enamored; he knew that Ann was the love of his life and was anxious to propose but Ann ultimately beat him to the punch and she asked Jim for his hand in marriage.  They eloped (much to his sister’s dismay) in Nashville, Tennessee on September 3rd, 1985.  Shortly after came the greatest gifts of Ann’s life, her two children, son Joseph Carl, born on March 2nd, 1987, and daughter, Jamie Leigh, born on November 16th, 1989.

Ann worked alongside Jim as an office manager until 1996 when she took a job as a Medical Secretary at North Country Hospital in Bemidji. They made the decision the next year to move to Jim’s hometown of Fosston to be closer to family. Once in Fosston, Ann began working as Deli Manager at Hartz Foods. Here, Ann was fulfilled by one of the greatest passions of her life, making people happy with her cooking and baking, until the time the store closed. In 2005, Ann and Jim formed their company, Offerdahl Broadcast Service, Inc. where she served many duties as Co-Owner, Vice President, Secretary-Treasurer and Office Manager. Her duties didn’t stop there though – she also served on the Veteran’s Memorial Park Committee, participating in the planning of the many improvements that have been realized over recent years as well as volunteering to take on the task of caring for and maintaining the beauty of the floral arrangements adorning the park.

Ann was a passionate and talented woman. As mentioned, she loved cooking, but she was an especially gifted baker. She spent hours upon hours experimenting and creating her own recipes, intricately decorating beautiful cookies and cakes, and making pies and ice cream from scratch, much to the enjoyment of her friends and family. Her talent and eye for beauty didn’t stop at baked goods though; she loved to work on her home and garden and kept them looking photo ready for every season. Ann took great pride in having a welcoming, warm, and beautifully decorated home with an open door for friends and family alike.

While Ann treasured these activities, the most important thing in her life was her family, dedicating herself fully to her beloved husband and children. She loved to travel with them, both internationally and across the US, making frequent trips to Orlando to spend time with Jamie. One of the places she and Jim often enjoyed visiting was Nashville, an homage to their place of marriage. She loved music and especially enjoyed listening to it live, so they made sure that the Grand Ole Opry was always a staple of their visits. No matter the location, however, Ann was happy as long as she was with her best friend and life partner, Jim.

After a short illness, Ann passed away peacefully in the presence of her husband and children on September 22nd, 2021 at the age of 65 years.

To order memorial trees or send flowers to the family in memory of Ann Offerdahl, please visit our flower store.