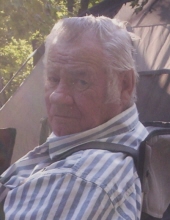 Arnold "Jr." Olson, age 82, of rural Mentor, MN, passed away on Saturday, October 13th, at Villa St. Vincent in Crookston, MN with his family by his side. Funeral services will be held at 2:00 p.m. on Thursday, October 18th, at Faith Lutheran Church in Mentor with the Rev. Michael Sletto officiating. Interment will be in Faith Lutheran Cemetery, rural Mentor. Visitation will be held for one hour prior to the service on Thursday at the church. Military honors will be conducted by the National Guard Honors Team. Arrangements are with the Carlin Family Funeral Home of Erskine and messages of condolence may be sent at www.carlinfuneral.com.Arnold Duaine Olson, Jr. was born on September 2, 1936 in Crookston, Minnesota to parents Arnold Sr. and Mervyn Ostgaard Olson. He grew up in Tilden Township, attended Tilden country school and graduated from Mentor High School in 1954. He farmed in the area until entering the United States Army in October of 1959. Jr. drove truck in the military in Fort Carson, Colorado and received his honorable discharge in February of 1962. He returned to Mentor and farmed with his father in Grove Park Township. He was united in marriage to Audrey Ekeberg on May 7, 1977 at Immanuel Lutheran Church in McIntosh. After their marriage, they farmed and raised beef cattle in the Mentor area.He enjoyed hunting and spear fishing, going to the sales barn and looking at Ford pickups. He also liked watching football and was an avid Vikings and Broncos fan. In his earlier years, Jr. liked to attend auction sales. Survivors include his wife of 41 years, Audrey, of Mentor; one daughter, Sarah (Terry) Whalen of Oklee, MN; step-son, Mike Lee of Mentor, MN; grandchildren, Brooke Lee, Trevor Lee (Hanna Braaksma), and Chase, Carlee, and Claire Whalen. Also surviving are two brothers, Roger Olson of Mentor and David (Janice) Olson of Red Lake Falls, MN. Many nieces and nephews also survive.He was preceded in death by his parents; step mother, Marie Plante Olson; brother, Steve Olson; sisters-in-law, Linda Olson and Judy Olson; and an infant nephew. Our family wishes to thank everyone for the continued love and support during these difficult days. We sincerely appreciate it.

To order memorial trees or send flowers to the family in memory of Arnold Olson, please visit our flower store.