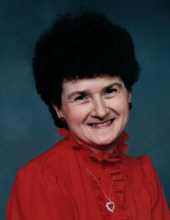 Barbara Algaard, age 81, of Fosston, MN, passed away on Sunday, March 24th, at Essentia Health Living Center in Fosston. Funeral services will be held at 11:00 a.m. on Saturday, March 30th, at Hope Lutheran Church in Fosston with the Rev. Jane Eckholm officiating. Interment will be in Kingo Lutheran Cemetery, Fosston. Visitation will be held from 5:00 p.m. to 7:00 p.m. with a 7:00 p.m. prayer service on Friday, March 29th, at the Carlin Funeral Home in Fosston. There will also be reviewal for one hour prior to the service on Saturday at the church. Arrangements are with the Carlin Funeral Home of Fosston and messages of condolence may be sent at www.carlinfuneral.com. Barbara Evelyn Algaard was born on June 6, 1937 in Fosston, MN to parents Fred and Stella Miller. She was confirmed at Hope Lutheran Church in Fosston and then graduated from Fosston High School in 1956. Barb was united in marriage to Art Quam on January 1, 1956. Together they had five children. Barb and Art later divorced. On October 17, 1981 she married Earl Algaard. While her children were young, she stayed home to raise them and then began working at Gambles in Fosston where she was employed for ten years. When Gambles was sold, she began working at Ben Franklin. Most people remember Barb from her years there, working in the fabric and floral departments. She found great joy in helping everyone who came into the store. Barb ended her career working at K's Variety in June of 2007. Barb was a very gifted seamstress, making numerous quilts for her children, grandchildren, and many others. She also loved working in her flower & rock garden. Her talent and knowledge of flowers extended into the beautiful florals that she made not only for herself but also for others. Barb valued time spent with her family, especially on the holidays. These times were centered around competitive games of Parcheesi, Hearts, Sequence, and Croquet. Barb passed away on March 24, 2019 at Essentia Health Living Center in Fosston at the age of 81. She is survived by her five children; Beverly Drellack of Fertile, MN, Anita (Charles) Lucken of Fosston, MN, Connie Mark of Moorhead, MN, David Quam of Crookston, MN, and Daniel (Cindy) Quam of Aberdeen, SD. She is also survived by 9 grandchildren and 12 great grandchildren. She was preceded in death by her parents Fred and Stella Miller, brothers Bob Miller and Ron Miller, sister Ruth Schroeder, husband Earl Algaard, and son-in-law Roger Drellack.

To order memorial trees or send flowers to the family in memory of Barbara Algaard, please visit our flower store.