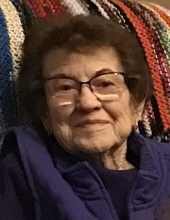 Betty Bjornerud, age 88, of Fosston, MN, passed away on Tuesday, March 28th, at Sanford Hospital in Fargo, ND. Funeral services will be held at 3:00 p.m. on Saturday, April 1st, at Hope Lutheran Church in Fosston with the Rev. Paul Magelssen officiating. Interment will be in Hope Lutheran Cemetery, Fosston. Visitation will be held from 5:00 p.m. to 7:00 p.m. with a 7:00 p.m. prayer service on Friday, March 31st, at the Carlin Funeral Home in Fosston. There will also be reviewal for one hour prior to the service on Saturday at the church. Arrangements are with the Carlin Funeral Home of Fosston and messages of condolence may be sent at www.carlinfuneral.com. Betty June Bakken was born on June 10, 1928 in Fosston, Minnesota to parents Helmer and Cora Christianson Bakken. She was baptized and confirmed at Hope Lutheran Church and graduated from Fosston High School. Following high school, she went to teacher's training school in Grand Forks and taught in Fosston area rural schools.Betty was united in marriage to Russell Dennis Bjornerud on January 1, 1949 at Hope Lutheran Church in Fosston. After their marriage, they made their home and raised their family in Fosston. In addition to teaching, Betty worked at the Hartz Store in Fosston for 15 years and as a seamstress at the Fosston Cleaners. Russ passed away on September 15, 1998. She has since continued to live at her home in Fosston.She was a life-long member of Hope Lutheran Church where she was active in ladies group and quilting. She was an election judge for many years, a member of the Tangen-Walstrom American Legion Auxiliary, and her dearly enjoyed her friends in her coffee group and birthday club. Betty enjoyed flowers, traveling, sewing, taking pictures, and made many quilts and pillows for her grandchildren.Survivors include her three children, Rick (Sandy) of Fosston, Renae (Ed) Schultz of Fosston, and Jayne (Jay) Clough of Brooklyn Park, MN; grandchildren and great grandchildren, Troy Bjornerud of Chicago, IL, Allison (Carlos) Sanchez of London, England and their children, Kane, Rowan and Sennen; Jamie (Ashley) Bjornerud of Bemidji, MN and their children, Tyson and Jamison; Ashley Bjornerud of Austin, TX; Erica (Tim) Trana of Mandan, ND and their children, Ebony and Ethan; Kelsey Schultz of Wheaton, MN and his children, Danya, Matthew, and Mason; Heath Schultz of Orange, CA; Jenna (Aaron) Reddish of Dickinson, ND and their children, Aram, Gage and Dewey; Johnny Schultz of Stanford, CA; and Noah, Jonah and Emma Clough at home in Brooklyn Park. Two great great grandchildren, Keya and Lily and several cousins also survive.She was preceded in death by her husband; her parents; and an infant sister, Phyllis.

To order memorial trees or send flowers to the family in memory of Betty Bjornerud, please visit our flower store.