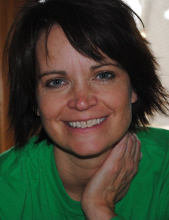 Candace "Candy" Keller, age 49, of Fosston, MN and formerly of Argyle, MN, passed away on Friday, November 30th, at Essentia Health Hospital in Fosston following a courageous battle with breast cancer. A Mass of Christian Burial will be held at 1:00 p.m. on Friday, December 7th, in the Fosston High School new gym with Father JohnMelkies Suvakeen and Father Dave Super Concelebrating. Interment will be in St. Mary's Catholic Cemetery, Fosston. Visitation will be held on Thursday, December 6th from 5:00 p.m. to 7:00 p.m. with a Rosary and 6:45 p.m. followed by a prayer service at 7:00 p.m. at St. Mary's Catholic Church in Fosston. There will also be reviewal for one hour prior to the service on Friday at the high school. Arrangements are with the Carlin Funeral Home of Fosston and messages of condolence may be sent at www.carlinfuneral.com.Candy was born August 18, 1969 in Crookston, Minnesota, the daughter of Alex "Bob" Kasprowicz and Margie (Durand) Kasprowicz. She attended St. Rose Catholic Elementary School in Argyle, Minnesota and graduated from Argyle High School in 1988. She attended Moorhead State University before transferring to North Dakota State University, graduating from there with a degree in food and nutrition. Candy was united in marriage to John Keller on July 23, 1994 at St. Rose of Lima Catholic Church in Argyle. The couple was blessed with three children; Claudia (21), Hannah (19) and Ben (15).Candy worked at Sisters of St. Joseph in Crookston and then McIntosh Manor in McIntosh, Minnesota as a Registered Dietician. In 2001, she was hired by First Care Medical Services of Fosston, which eventually merged with Essentia Health. She worked there for 17 years until her death, both as a Registered Dietician and Diabetes Educator. She loved her patients and her co-workers and was a loyal and committed part of Essentia's team of outstanding health care professionals.Candy was a member of St. Mary's Catholic Church in Fosston as well as the Northwest Regional Dietetic Association. She was also a member of the Fosston Athenian Club and was involved with the Fosston Elementary basketball program. She enjoyed reading, exercising, country music and spending time with family and friends. She spent a lot of her time speaking to her daughters on the phone while they attended college. One of her favorite things to do was attending her son, Ben's, baseball games with the other mothers. Candy was a beautiful person on the inside and the outside. She was humble, kind, dependable and never said a bad word about anyone. Candy is survived by her husband of 24 years, John Keller of Fosston; children, Claudia Keller of Moorhead, MN, Hannah Keller of Moorhead, MN, and Ben Keller at home in Fosston; her parents, Bob and Margie Kasprowicz of Argyle, MN; brothers, Bobby Kasprowicz of Huntington Beach, CA, Todd Kasprowicz of Glendale AZ, Troy Kasprowicz of Halma, MN, and Chris Kasprowicz of Maple Grove, MN; and sister, Heidi (Paul) Carlson of Argyle, MN; mother-in-law, Sharon Keller of Warroad, MN and many brothers and sisters-in-law, nieces and nephews, along with all of her friends and her co-workers at Essentia Health. She was preceded in death by her father-in-law, Warren Keller of Warroad, Minnesota.She considered herself lucky in that she had two home towns, Argyle, Minnesota and her adopted hometown of Fosston, Minnesota

To order memorial trees or send flowers to the family in memory of Candace Keller, please visit our flower store.