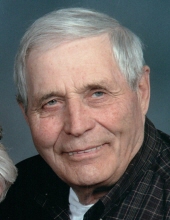 Charles Balstad, age 87, of Fosston, MN, passed away on Tuesday, September 24th, at Essentia Health Hospital in Fosston. Funeral services will be held at 2:00 p.m. on Saturday, September 28th, at Kingo Lutheran Church in Fosston with the Rev. John Ragan officiating. Interment will be in Bethel Cemetery, rural Winger, MN. Visitation will be held from 5:00 p.m. to 7:00 p.m. with a 7:00 p.m. prayer service on Friday, September 27th, at the Carlin Funeral Home in Fosston. There will also be reviewal for one hour prior to the service on Saturday at the church. Arrangements are with Carlin Family Funeral Service of Fosston and messages of condolence may be sent at www.carlinfuneral.com.Charles Allen Balstad was born on November 15, 1931 on the Balstad home farm in Rosebud Township, Minnesota to parents Rudolph "Boots" and Ida (Galaason) Balstad. He grew up in Rosebud Township, attended Fosston schools and then the Crookston AC. Charles farmed until he entered the Unites States Army on October 23, 1953. After serving in the 82nd Airborne, he received his honorable discharge on October 21, 1955. He returned home and continued farming with his father, ‘Boots'.Charles was united in marriage to Millicent "Mitzi" Erickson on July 5, 1958 in her hometown of Hallock, Minnesota. Together they farmed and raised their family of seven children near Fosston. His life was farming and ranching. He was a member of Kingo Lutheran Church where he was active on church council. He served on the Boards of Directors of Central Livestock Exchange, the Federal Land Bank in Crookston, and the East Polk County Fair Board. Survivors include his wife, Millicent "Mitzi" of Fosston; seven children, Charles, Jr. "Casey" (Twyla) of Austin MN, Scott (Marlys) of Fosston, Richard (Susan) of Fosston, William (Liz) of Juneau, AK, Nathan (Lisa) of Sheridan, WY, Karl of Fosston, and Laurie (Brian) Schmidt of Tomahawk, WI; 16 grandchildren, Kyle, Jack (Miki), Sydney, Katlyn, Elizabeth, Shannon, Gina, Mary, Logan, Laurie Jayne, Emma, Rudi, Allison, Martin, Robin, and Galen; one great grandson, Darby.He is also survived by his sister, Marilyn (Darol) Melby of Bagley, MN and nieces, nephews and cousins.He was preceded in death by his parents; one brother, Robert "Bud" and his wife, Juanita, and two sisters, Margaret Hoyt and her husband, Robert, and Marjorie Olson and her husband, George.

To order memorial trees or send flowers to the family in memory of Charles Balstad, please visit our flower store.