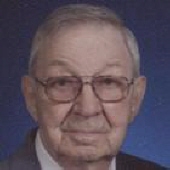 Chester "Chet" Benson, age 95, of Erskine, MN, passed away on Friday, September 11th, at McIntosh Senior Living in McIntosh, MN. Funeral services will be held at 2:00 p.m. on Friday, September 18th, at Grace Lutheran Church in Erskine with the Rev. Timothy Lundeen officiating. Interment will be in Fairview Cemetery, rural Erskine. Visitation will be held for one hour prior to the service on Friday at the church. Arrangements are with the Carlin-Hoialmen Funeral Home of Erskine and messages of condolence may be sent at www.carlinhoialmen.com.Chester Myles Benson was born January 17, 1920 to parents Andy "Louis" and Mabel (Kraft) Benson in Fosston, Minnesota. He was baptized and confirmed at Grace Lutheran Church by Rev. A.N. Skogerboe. He attended all eight grades at the Foot Lake Country School. At an early age, he began farming his parent's farm south of Erskine until 1970 at which time he started working for Simplot in Crookston, Minnesota.He was united in marriage to Clarice (Sandberg) Helgaas on May 12, 1971. Together, Chet and Clarice lived in Crookston until Chet's retirement in 1996 when they settled in Erskine, Minnesota. Clarice Benson passed away on October 17, 2007. Chester moved to the McIntosh Senior Living in July of 2010 where he received excellent care and enjoyed teaching some of the staff how to speak "Norwegian!" He had a wonderful sense of humor and when asked what his secret to living a long life was, he would reply, "I quit smoking years ago and I don't worry about anything!"In his earlier years, he enjoyed hunting and even tried his hand at raising mink for a few years. He was a gifted mechanic who kept things running smoothly. He also had a passion for classic cars (especially a good Dodge or Oldsmobile) and he loved his coffee & CHOCOLATE!!! He was a kind and easy going man who enjoyed visiting with family and friends wherever he was! This included his past attendance at Senior Meals in Erskine (thanks Laura for your years of kindness to Chet) and Grace Ladies Aid church suppers when his "cousins" would be there and of course all the friends he made during his five year stay at the McIntosh Senior Living Center. Chet was a past member of Trinity Lutheran Church in Crookston, Minnesota and a current member of Grace Lutheran Church of Erskine. Chester passed away on Friday, September 11, 2015 at the McIntosh Senior Living Center at the age of 95 years, seven months and 23 days.Survivors include his two sisters, Vivian Hanson of Erskine, MN and LaVerne Benson of McIntosh, MN, two step-daughters, Phyllis (Butch) Sturre of Great Falls, MT and Judith McGavock of Grand Forks, ND, one step-son, John (Sherri) Helgaas of Crookston, MN, two step-grandchildren, Kimberly Sturre of Missoula, MT, Carrie (Carl) Stalnaker of Hamburg, MN and one brother-in-law, Joe (Dorothy) Sandberg of Erskine, MN. He is also survived by several nieces, nephews and other relatives.He was preceded in death by his parents, Andy "Louis" and Mabel Benson, his wife, Clarice Benson, and brothers-in-law, Ulysses Benson and Archie Hanson.

To order memorial trees or send flowers to the family in memory of Chester Benson, please visit our flower store.