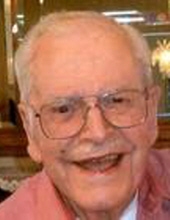 Clifford Strande, age 96, of Fosston, MN, passed away on Monday, November 14th, at Essentia First Care Living Center in Fosston. Funeral services will be held at 2:00 p.m. on Saturday, November 26th, at Hope Lutheran Church in Fosston with the Rev. Paul Magelssen officiating. Interment will be in Fort Snelling National Cemetery, Minneapolis. Visitation will be held for one hour prior to the service on Saturday at the church. Arrangements are with the Carlin-Hoialmen Funeral Home of Fosston and messages of condolence may be sent at www.carlinhoialmen.com. Memorials are preferred to Hope Lutheran Church in Fosston or the Gloryland Gospel Team. Clifford Marvin Strande was born on April 30, 1920 in Fosston, Minnesota to parents Albert and Anna (Bilden) Strande. He was raised in Fosston where he attended school and studied his catechism. He entered the United States Army in October of 1941, faithfully serving his country during World War II. He received his honorable discharge in December of 1945 and returned to Fosston. Upon his return home, Cliff worked as a truck driver around Fosston and neighboring communities. Cliff was married to Currien Aspen at Hope Lutheran Church in Fosston. After he married, he moved his family to Minneapolis where he gained employment as a black top paver operator. The Alexander Company not only worked on the streets and parking lots around Minneapolis and St. Paul, but also accepted a contract to build an air strip on the island of Bermuda. There were many paving stories. Whenever there was a paving project near his home this sharp eyed side-walk superintendent would keep an eye on the procedure and progress of the project. They returned to Fosston in 1980 and has lived here since that time. He enjoyed traveling with Currien and spending winters in Florida and Texas. Currien passed away on March 15, 2001. A very gentle caring man with a wonderful sense of humor, he was always busy with a current project or inventing something to take the place of something he did not have on hand. In his younger years, he loved to attend dances. During later years, he would hold onto the kitchen cabinet doors while he practiced his footwork. How he loved to dance. Our memories of Cliff will be cherished throughout each of our lifetimes. He was a member of Hope Lutheran Church, Operating Engineers Union Local 49, and the Tangen-Walstrom American Legion of Fosston. He is survived by a step-daughter Murel Mickie Johnson and husband LeRoy Sonny Johnson of Crowley, TX, four grandchildren; seven great grandchildren; one great great granddaughter; and several nieces and nephews, all who miss him very much. Cliff was preceded in death by his wife, Currien; his parents; four brothers and eight sisters.

To order memorial trees or send flowers to the family in memory of Clifford Strande, please visit our flower store.