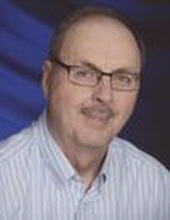 Curt Jenson, age 64, of Erskine, MN, passed away on Sunday, October 23rd, at his home on Lake Sarah. Funeral services will be held at 2:00 p.m. on Friday, October 28th, at Grace Lutheran Church in Erskine with the Rev. Timothy Lundeen officiating. Interment will be in Fairview Cemetery, Erskine, at a later date. Visitation will be held from 5:00 p.m. to 7:00 p.m. with a 7:00 p.m. prayer service on Thursday, October 27th, at the Carlin-Hoialmen Funeral Home in Erskine. There will also be reviewal for one hour prior to the service on Friday at the church. Arrangements are with the Carlin-Hoialmen Funeral Home of Erskine and messages of condolence may be sent at www.carlinhoialmen.com. Memorials may be shared to the Pioneer Memorial Care Center Foundation. Curtis Wade Jenson was born on April 26, 1952 in Grafton, North Dakota to parents Clayton and Della (Karel) Jenson. The family moved to a farm near Erskine, Minnesota in 1952 and Curt graduated from Erskine High School with the class of 1970. Following high school, Curt attended Northland Community College in Thief River Falls and then Mayville State University. He graduated with a Bachelor of Science degree in High School Social Studies and Physical Education in 1974. He went on to teach those subjects at Mentor High School, where he also coached football and basketball. Curt was united in marriage to Nancy Sutter on October 18, 1975 in Detroit Lakes, Minnesota. After their marriage, they made their home in Erskine and raised their three children, Ann, David and Robert. Curt loved being a dad, and he was a playful and affectionate man who could often be found on the floor with his kids (or grandkids) crawling and climbing all over him. Curt worked as an agent for MSI Insurance in Erskine before becoming a nursing home administrator. Over the years Curt shared his passion for caring for residents as an administrator at various area care centers. His professional life was defined by his generosity and devotion to the residents he served. He was held in high esteem by his peers and received a Lifetime Achievement Award from Care Providers of Minnesota in 2011. He retired from the Pioneer Memorial Care Center in Erskine in the spring of 2011. Curt was a lifelong sports fan who spent countless hours playing and watching football, baseball, softball, basketball, broomball, and golf, often with his brother Allen. Special sports memories include attending the sixth game of the 1987 World Series, playing in a softball tournament in the Metrodome, and touring and attending a game at Lambeau Field with Allen. Curt also shared his passion for athletics with his children, and loved to watch them play sports and take them to games. He was a member of Grace Lutheran Church and the Erskine Lions Club, and volunteered with the Erskine Fire Department for 19 years. He was also a long-time member of Oak Lake Golf Course, and in the summers could often be found on the course with his brothers and sons. He also had a lifelong interest in history and politics. Curt was a humble man with a quiet faith and will be remembered for his kindness and generosity. Most of all, he was a loving and devoted husband, father, and grandfather, and his family was always his highest priority. He will be dearly missed. He is survived by his loving wife of 41 years, Nancy, of Erskine; three children, Ann Johnson of Erskine, MN, David (Carolyn) of Maple Grove, MN, and Robert (Stacy) of Fargo, ND; six grandchildren, Josie, Oliver, Logan, Benjamin, Jonathan, and Emelyn; two brothers, Dwaine (Geraldine) Jenson and Allen (Elizabeth) Jenson, both of Erskine. Nieces, nephews and cousins also survive. He was preceded in death by his parents; brother, Daryl Jenson; and sister, Ardis Thompson.

To order memorial trees or send flowers to the family in memory of Curt Jenson, please visit our flower store.