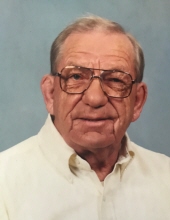 Dennis "Denny" Rossell, age 89, of Fosston, MN, passed away peacefully on Sunday, February 9th, at Pioneer Memorial Care Center in Erskine, MN. Funeral services will be held at 11:00 a.m. on Saturday, February 15th, at Hope Lutheran Church in Fosston with the Rev. Jane Ekholm officiating. Interment will be in Hope Lutheran Cemetery, Fosston, at a later date. Visitation will be held for one hour prior to the service on Saturday morning at the church. Military honors will be provided by the National Guard Honors Team and arrangements are with Carlin Family Funeral Service of Fosston. Messages of condolence may be shared at www.carlinfuneral.com.Dennis Willard Rossell was born on May 20, 1930 in Clearbrook, Minnesota the son of Vernie and Clara (Swenson) Rossell. As a child he attended school in Clearbrook and grew up working on the family farms. Dennis joined the United States Army Reserves in 1950 and in the fall he received notice to fight in the Korean War. He received the Bronze Medal and V Bar for his brave service. Upon returning home he married Violette Marie Bjornerud of Fosston, Minnesota on February 20, 1954. They moved to Aurora, Minnesota for a short while and worked on the iron range and then settled in Fosston where he worked at the grain elevator for 15 years and served as a local fireman from 1962 to 1984. Denny was a member of Hope Lutheran Church and the Tangen-Walstrom American Legion Post in Fosston. He loved his family and enjoyed long trips, cruising Fosston, reading the paper, and playing the lottery.He is survived by his daughter, Joanne (Michael) Elliott of Centennial, CO; son, Paul (Barbara) Rossell of Milaca, MN; brother, Franklin (Nancy) Rossell of Queen Creek, AZ; five grandchildren, Mandy, Samantha, Joshua, Jason, and Brandon; and three great grandchildren, Kaven, Elise, and Elijah. Nieces nephews and cousins also survive. He was preceded in death by his parents, Vernie and Clara; his loving wife, Violette; one son, Michael; three sisters and four brothers. Thank you to Debbie Klein for all your support through the years.On behalf of the family, we wish to express our gratitude for your many kindnesses expressed in thoughts, prayers and for your presence at this difficult time.

To order memorial trees or send flowers to the family in memory of Dennis Rossell, please visit our flower store.