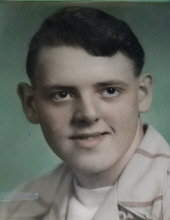 Derry DeFrang, age 84, of McIntosh, MN, passed away on Saturday, June 1st, at McIntosh Senior Living. Funeral services will be held at 11:00 a.m. on Saturday, June 8th, at the Carlin Funeral Home in Fosston with the Rev. Gordon Syverson officiating. Interment will be in Our Savior's Lutheran Cemetery at a later date. Visitation will be held for one hour prior to the service on Saturday at the funeral home. Arrangements are with Carlin Family Funeral Service, serving McIntosh. Messages of condolence may be sent at www.carlinfuneral.com. Derry John DeFrang was born on June 2, 1934 in McIntosh, Minnesota to parents John and Lillian (Halvorson) DeFrang. He attended rural school and then worked as a carpenter for Kalmer Bjella and then Roy Bjornerud for over 20 years. Derry was united in marriage to Shirley Ferden on November 18, 1956 in Milwaukee, Wisconsin. After their marriage, they came back home to the DeFrang homestead so they could help his mother, Lillian, with DeFrang Rest Home. Also, at that time, Derry worked at the Creamery in McIntosh. He worked there for 20 years, spending the last eight years as Manager. In addition, the DeFrang family raised livestock (cattle and hogs). Shirley passed away on December 5, 2018.After Shirley passed away, Derry continued to live at home in McIntosh with the help and care of his son, Steve. He spent all but the last day of his life in his home. Derry loved horses throughout his life and had teams of horses. He took pride in his animals and always cared for them well. Derry enjoyed giving rides to children and families pulled by his teams of horses during special occasions in town. Derry passed away on Saturday, June 1st, at McIntosh Senior Living at the age of 84 years. Survivors include his children, Dan (wife, Darcie) of Duluth, MN, Steve of McIntosh, and daughter, Suzann (wife, Stacy) of Fargo, ND; six grandchildren, Hilary, Kayla, Bobbie, Derek, Joshua, and Spencer; six great grandchildren; and one sister, Patsy Gravel (husband, DC) of Austin, TX. Nieces, nephews and cousins also survive.He was preceded in death by his parents; his wife, Shirley; son, Johnnie; and sisters, Winnifred Klemmetson and Wenonah Frisk.

To order memorial trees or send flowers to the family in memory of Derry DeFrang, please visit our flower store.