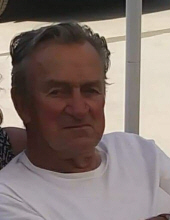 Donald "Booner" Klinke, age 83, of Lengby, MN, passed away on Thursday, December 12th, at Essentia Health Hospital in Fosston. Funeral services will be held at 11:00 a.m. on Friday, December 20th, at St. Paul Lutheran Church in Lengby with the Rev. Gene Lilienthal officiating. Interment will be in Immanuel Lutheran Cemetery, Lengby, in the spring. Visitation will be held from 5:00 p.m. to 7:00 p.m. with a 7:00 p.m. prayer service on Thursday, December 19th, at the Carlin Funeral Home in Fosston. There will also be reviewal for one hour prior to the service on Friday at the church. Arrangements are with Carlin Family Funeral Service of Fosston and messages of condolence may be sent at www.carlinfuneral.com. In lieu of flowers, memorials are preferred to St. Paul Lutheran Ladies Aid. There will be a dinner at the Lengby Community Hall immediately following the funeral service. Please join the family there to share a meal and a story.Donald Eugene Klinke was born on September 9, 1936 at home in Island Lake Township near Lengby, Minnesota to parents William and Ruby (Colligan) Klinke. He was baptized at the United Methodist Church in Ebro and confirmed (along with Dolly) by Pastor Guldberg at St. Paul Lutheran Church in Lengby. He attended school at the Klinke country school and graduated from Fosston High School in 1954. After high school, he logged with his brother and worked at the sawmill in Lengby. Donald was united in marriage to Wilma "Dolly" Jean Blue on December 28, 1957 at the Episcopal church in Naytahwaush. Following their marriage, they lived in Washington State for one year where Don did construction work. The family returned to his birthplace, the Klinke home farm, near Lengby where he lived the rest of his life. They farmed, raised beef cattle and hogs; he worked as a carpenter and did logging work. He was also a Foreman for Breckenridge Electric and Aerial Contractors demolishing and recycling overhead telephone lines and plowing new underground cable. One of his favorite things to do was to drive around Polk and Mahnomen Counties looking at the crops and the countryside. He raised Canadian geese, deer hunting, drawing, and was well-known for his Whist playing prowess. Booner harvested and built a log cabin out of trees that he himself planted. It is enjoyed to this day by family and friends during deer hunting and other special occasions. Over the years he enjoyed watching his grandsons play football and always had a smile on his face when he rocked his grandbabies. He was a very trusting, giving person and was always willing to lend a helping hand to anyone in need. He will be dearly missed.Survivors include his loving wife of nearly 62 years, Dolly, of Lengby; five children, Eugene "Zeke" (Janelle) Klinke of Union Lake, Jackie (Alan) Olson of Lengby, Margaret "Snoop" (Gary) Fredrickson of Lengby, Mary Jo Klinke (Michael Ettl) of Bemidji, MN, and John "Pete" Klinke (Dawn Gravelle) of Bemidji, MN. Also surviving are 16 grandchildren, Meggan Tangen, Matt (Kelly) Olson, Rebecca (Aaron) Myhre, Katie (Derek) Norby, Taylor Klinke, Trevor Klinke, William (Mikayla) Klinke, Erin Guenther, Elizabeth Guenther, Ben Sorenson, Joseph Sorenson, Isaac Klinke, Caleb Klinke, Noah Klinke, Eli Klinke, and Josie Klinke; 8 great grandchildren, Cameron Olson, Drake Olson, Carson Norby, Maclin Norby, Jackson Myhre, Connor Myhre, James Tangen, and Emma Tangen; and many nieces, nephews and cousins.He was preceded in death by his parents; and siblings, Earl, Loren, Edith, Allen "Bud", Olive, Betty, Bill, Margaret, Lee, and infant siblings, Ellen and David.

To order memorial trees or send flowers to the family in memory of Donald Klinke, please visit our flower store.