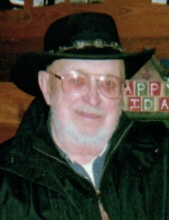 Don Ramberg, age 82, of Mentor, MN, passed away on Monday, January 7th, at Altru Hospital in Grand Forks, ND. Funeral services will be held at 2:00 p.m. on Saturday, January 12th, at Gosen Lutheran Church, rural Erskine, MN with Pastor Gary Johnson officiating. Interment will be in Rosehill Cemetery, rural Mentor, MN. Visitation will be held for one hour prior to the service on Saturday at the church. Military honors will be provided by the National Guard Honors Team. Arrangements are with the Carlin Funeral Home of Erskine and messages of condolence may be sent at www.carlinfuneral.com. Donald Arthur Ramberg was born on February 1, 1936, the son of Chester and Evelyn Ramberg. He was raised in Stephen, Minnesota and at the age of 12, moved with his parents to Mentor, Minnesota. He graduated from Mentor High School in 1954, joined the Air Force in 1955, and received his honorable discharge in 1959.Don then moved to Denver and attended the Colorado School of Trades, graduating in 1962. He went to work for Minneapolis Honeywell (Denver Division) as a model maker machinist. He returned to Mentor in 1967 and opened a boat, motor, and gun repair shop.He was married to Sharon Wilkinson in 1973 and became step father to Tammy Wilkinson at the same time. On the first Monday in June of 1979, Don and Sharon accepted Jesus as their Lord and Savior.In 1982, they started a second business called Oof-da Taco. They took Oof-da Taco to Quartzsite, Arizona in 1985 and worked there in the winter months. They retired in 2000.Don passed away on Monday, January 7, 2019 at Altru Hospital in Grand Forks, North Dakota with his family at his side at the age of 82 years.Survivors include his loving wife of 45 years, Sharon, of Mentor, MN; step daughter, Tammy (Steve) Olson of Hope, ND; one brother, Keith Ramberg of Mentor; three grandchildren; three step grandchildren; 14 great grandchildren and three more on the way; nieces, nephews, and little Oof-da Mae.He was preceded in death by his parents; and sister-in-law, Donna Ramberg.

To order memorial trees or send flowers to the family in memory of Donald Ramberg, please visit our flower store.