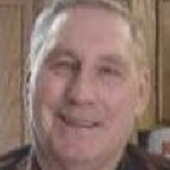 Ed Swenson, age 80, of Fosston, MN, passed away on Thursday (November 6th) at Twin Valley Living Center in Twin Valley, MN. Funeral services will be held at 2:00 p.m. on Monday (November 10th) at St. Paul Lutheran Church in Lengby, MN with the Rev. Mark Faugstad officiating. Interment will be in Cross Lake Cemetery, rural Fosston. Visitation will be held for one hour prior to the service on Monday at the church. Military honors will be conducted by the Spring Lake V.F.W. Post #2759 of Lengby. Arrangements are with the Carlin-Hoialmen Funeral Home of Fosston and messages of condolence may be sent at carlinhoialmen.com.Edwin Leon Swenson was born on August 7, 1934 in Fosston, Minnesota to parents Hans and Louisa Jensen Swenson. He grew up in Fosston and attended school at Fosston High School. He entered the United States Air Force in March of 1953, serving in Korea and two tours in Vietnam. Upon returning home, he continued his military career in several locations around the United States. He was married to Patricia Sellers on March 15, 1962 in Upper Marlboro, Maryland. He received his retirement out of the Grand Forks Air Force Base in April of 1976. After his military retirement, Ed worked in refrigeration maintenance at Simplot in Grand Forks while Pat was employed at Sears in Grand Forks. They built a home east of Fosston in Columbia Township and relocated there in 1984. In October of 2009, they sold their home and moved in to Fosston. Ed was diagnosed with cancer in July of 2014 and, since August, has been living at the Twin Valley Living Center in Twin Valley, Minnesota.He was a member of St. Paul Lutheran Church in Lengby, the Spring Lake V.F.W. Post #2759, and the Fosston and Grand Forks American Legions and was an avid gun collector.He is survived by his wife of 52 years, Pat of Fosston; daughter, Linda Swenson of Eugene, OR; and several cousins.He was preceded in death by his parents.Honorary Pallbearers: Spring Lake V.F.W. Post #2759 of LengbyActive Pallbearers: John Nord, Luke Nelson, Kenny Lomen, Luverne Lomen, James Manecke, and Jim Lomen.

To order memorial trees or send flowers to the family in memory of Ed Swenson, please visit our flower store.