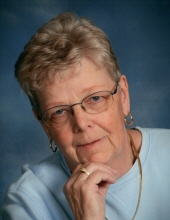 Elaine Foss Ebnet, age 70, of Mentor, MN, passed away on Thursday, March 14th, at her home. Funeral services will be held at 1:00 p.m. on Thursday, March 28th, at Faith Lutheran Church in Mentor with the Rev. Michael Sletto officiating. Interment will be in Rosehill Cemetery, rural Mentor, at a later date. Visitation will be held for one hour prior to the service on Thursday, March 28th, at the church. Arrangements are with the Carlin Funeral Home of Erskine and messages of condolence may be sent at www.carlinfuneral.com.Elaine Marcia Foss was born on March 4, 1949 in Grand Forks, North Dakota to parents Marvin and Alma Sistad Foss. They moved to a farm at Mentor, Minnesota where she grew up, attended school and graduated in 1967. She was confirmed at Faith Lutheran Church in Mentor. She attended Hibbing Vocational Schools and completed the certified medical lab tech courses. She worked briefly at the hospital in Red Lake Falls, Minnesota before taking a job at Aitkin Community Hospital, where she worked for about 30 years. Elaine was married to James J. Hunter in 1971. They had one son, James T. Hunter. She later married Allen Ebnet in 1975, he had one son, John.In September 1997, she moved to Mentor to be closer to her mother Alma Foss and help her. She worked at Artic Cat in Thief River Falls until she retired in 2011. In 2013 she moved in with her mother and was her primary caregiver until Alma fell and moved to the nursing home in September of 2016.She loved her family. She was an excellent cook and baker. She loved the outdoors and living on the farm. She deer hunted every year with her son since he was 12 until his children could hunt. Even after she always looked forward to that time of year. She was quick witted and had a good sense of humor. She is survived by her son, James T. Hunter (Autumn) of Merrifield, MN; her mother, Alma Foss of Erskine; her sister, Judy Straughn of Aitkin, MN; brother, Duane Foss (Nola) of Wellton, AZ; four grandchildren, Tyler, Ashley, Hunter and Nicole; three nieces, Stephanie Rutt (James Packard) of Plymouth, MN, Shelly (McKinley) Brown of Baxter, MN, and Jennifer (Jeff) Rikala of Aitkin, MN; two grand nieces, Madison and Marissa Brown of Grand Forks, ND; and two grand nephews, Kyler and Quinton Rikala; and numerous cousins. She was preceded in death by her father, Marvin in 1977; stepson, John Ebnet, in 1986; brother-in-law, Joe Straughn, in 2015; and nephew, Ken Foss, in 2018.

To order memorial trees or send flowers to the family in memory of Elaine Ebnet, please visit our flower store.