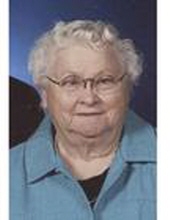 Fern Carlson, age 90, of Winger, MN passed away on Sunday, October 9th, at Essentia Health First Care Living Center in Fosston, MN. Funeral services will be held at 10:30 a.m. on Friday, October 14th, at Calvary Lutheran Church in Winger with the Rev. Gordon Syverson and Rev. Aage Carlsen officiating. Interment will be in the church cemetery. Visitation will be held from 5:00 p.m. to 7:00 p.m. with a 7:00 p.m. prayer service on Thursday, October 13th, and for one hour prior to the service on Friday. All visitation will be held at Calvary Lutheran Church in Winger. Arrangements are with the Carlin-Hoialmen Funeral Home of Fosston and messages of condolence may be sent at www.carlinhoialmen.com.Fern Marie Johnson was born May 21, 1926 at St. Vincents Hospital in Crookston, Minnesota to parents Henry and Pearl (Tice) Johnson. Fern started her life on a farm west of Mentor and later the family moved to a farm south and west of Mentor. Ferns father passed away when she was 11. When Fern was a teenager her mother took the job of Central Office Telephone Operator for the town of Mentor and they moved into town. Fern graduated from Mentor High School in 1944 and went on to Teachers Training School in East Grand Forks. Fern taught for 2 years in a rural school near East Grand Forks. On June 11, 1947, Fern married Milton Carlson at her grandparents home in Mentor, Minnesota. They began their married life on the farm Milton had farmed with his dad south of Erskine. They were blessed with three children, Paul, Wanda and Judith. Milton and Fern lived by Erskine until April 1, 1966 when they bought a farm southwest of Winger where they farmed and eventually partnered with their son, Paul, in the farming operation. Fern was always involved in her church and served as a Sunday School Teacher, had several offices in the Ladies Aide, was in the Erskine Kitchen Club and many other activities to serve her community. Fern loved to crochet, sew, knit and made quilts for all of her grandchildren. Fern and Milton loved to square dance and old tyme dance with Allan and Elaine and made many new friends at dances. She enjoyed spending time with her children, grandchildren, and great grandchildren and looked forward to their visits. Fern loved the Lord all of her life and she passed that faith on to her family. Fern passed away on Sunday, October 9, 2016 surrounded by her family at Essentia First Care Living Center at the age of 90 years. Fern is survived by her husband of 69 years, 4 months, Milton Carlson of Winger; her children, Paul (Donna Rae) Carlson of Winger, Wanda (Richard) Donovan of Saint Francis, MN, and Judith (Lonny) Gieseke of McIntosh, MN. Grandchildren, Chad (Michelle) Carlson, Brent (Jennifer) Carlson, Kristin (Monte) Erickson, Sheila (Chris) Benesh, Adam (Jessica) Carlson, Dustin (Nickie) Carlson, Brittney (Timothy) Holmes, James (Roxanne) Peterson, Mark W. (Melinda) Peterson, Joseph (Laura) Peterson, Lisa Gieseke (Roy) Schaumburg, and Kari Ann Gieseke (Michael) Keller. Step grandchildren, Christopher (Amy) Donovan, and Shannon (Christopher) Hovanec; and 33 great grandchildren. Also surviving is her brother-in-law, A. Merlin (Marilyn) Carlson of New Ulm, MN; and step brother-in-law, Neil Prescott of Spokane Valley, WA. Fern was preceded in death by her parents; sister, Lila Lerfald; brothers-in-law, Allan Carlson and Gordon Lerfald; sister-in-law, Elaine Carlson; grandchildren, Ryon Dale Gieseke and Jill Michelle Gieseke; great grandchild, Jamie Michelle Peterson; and step-sisters, Ramona Prescott and Shirley (Ed) Pryor. The Lord is close to the brokenhearted and saves those who are crushed in spirit. Psalm 34:18

To order memorial trees or send flowers to the family in memory of Fern Carlson, please visit our flower store.