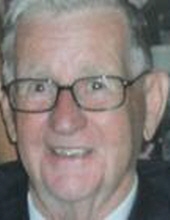 Gene Carr, age 85 from Fosston, MN passed away on Saturday, September 10th at Cornerstone Nursing and Rehab Center in Bagley, MN. Funeral services will be held on Friday, September 16th at 11:00 a.m. at Hope Lutheran Church in Fosston with Rev. Paul Magelssen officiating. Visitation will be held for one hour before the funeral at the church on Friday morning. Interment will be at Memorial Park Cemetery in Grand Forks, ND. The Carlin-Hoialmen Funeral Home of Fosston is in charge of the arrangements. Messages of condolence may be sent to carlinhoialmen.com. Eugene G. Carr was born April 17, 1931 to parents Glenn and Marie (Birkeland) Carr in Grand Forks, North Dakota. Gene graduated from Warren, Minnesota High School and graduated from the University of North Dakota with a degree in journalism. At UND, he was a member of Signa Nu fraternity and editor of the Dakota Student. He began his career as a Printers Devil at the Warren Sheaf while in high school. Gene served in the U.S. Army receiving Korean Service awards. Gene married his high school sweetheart, Adele Stewart on July 3, 1952 at Our Saviors Lutheran Church in Warren. He was editor of the Oklee Herald before and after the Korean War. They moved to Mound, Minnesota in 1956 where he was editor of the Mound Pilot. In 1961 they purchased the Hillsboro (ND) Banner newspaper. They also purchased the Hatton Free Press and Steele County Press in Finley (ND). They sold the newspapers in 1971 and Gene became the Executive Vice President of the North Dakota Newspaper Association. He also taught journalism classes at UND during his tenure. In 1983 they moved to Minneapolis when Gene was named chairman of the American Newspaper Advertising Reps (ANR). The Carr family purchased The 13 Towns newspaper in Fosston, Minnesota in 1988 and sold their share in 1997. He continued working for the newspaper until 1999 when he retired. Gene was active in every community he lived, and his newspapers won numerous awards. He was a tenor soloist in Mound, Hillsboro, Grand Forks, and Fosston church choirs. He served on the city council in Hillsboro and a member of the Masonic Lodge. In Fosston, he was President of East Polk County Heritage Society, and member of Hope Lutheran Church and a member of the Lengby VFW. He was named Person of the Year for his vision and coordination of Fosstons Annual Heritage Days Celebration. Gene passed away at the Cornerstone Nursing and Rehab Center in Bagley, Minnesota on September 10, 2016 at the age of 85 years. Surviving are his 4 children David (Barb), Lengby, MN; Nancy (Kip) Kaler, Fargo, ND; Susan (Duane) Borgeson, Sartell, MN; and Peter, Fosston, MN. He has 6 grandchildren, Elizabeth (Nathan) Olson, Amanda (Jonathan) Voigt; Grant, Greta and Mara Borgeson; and Nicole Jones; 4 great grandchildren, Kellen and Palmer Olson and Kai Jones and Pyper Reid. Also surviving are his sister, Margaret Stolee, Plymouth, MN and brother, Tom (Bobbie) Carr of Monterey, CA. He was preceded in death by his wife, Adele in 2002.

To order memorial trees or send flowers to the family in memory of Gene Carr, please visit our flower store.