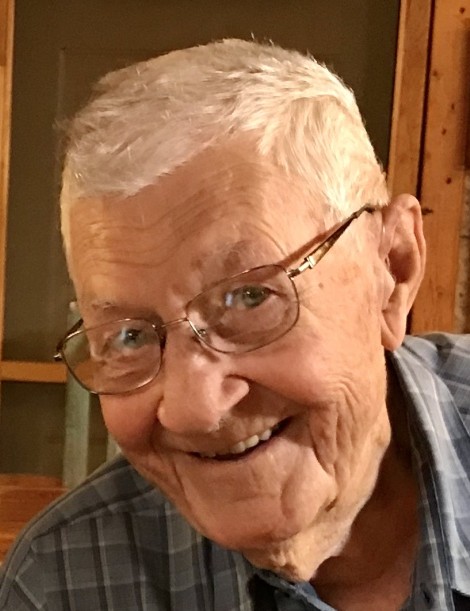 Gene Tonnie Lusty, age 92, Pharr, TX, and formerly of Mentor, MN, passed away on Friday, July 10, 2020 in a McAllen, TX hospital. A graveside service will be held at 1:00 p.m. on Saturday, May 22nd, at Faith Lutheran Cemetery in Mentor, MN with Pastor Leroy Sandford officiating. Military honors will be provided by the Naval Honors Team. All are welcome to attend. Arrangements are with Carlin Family Funeral Service of Erskine and messages of condolence may be shared at www.carlinfuneral.com.

Gene was born on the family farm near Mentor, MN to Sophie (Rice) Lusty and William Lusty on October 22, 1927. He attended school in rural Mentor and joined the Navy after his brother Eber was killed in WWII. He served his country proudly and remained a proud veteran all his life. He married Luilla McLennan of Hoople, ND on June 22, 1952. They were a great example of a couple dedicated to each other for 68 years. Together they enjoyed raising two daughters while living in Drayton, ND.

Gene learned a great work ethic on the family farm and worked hard all his life. After the Navy he worked for Otter Tail Rural Electric in ND, then he worked with his brother-in-law on the farm, next working as an inspector for USDA in potatoes and cherries in North Dakota, Iowa, Virginia, and Michigan. Finally, he moved to the US Postal Service starting as a rural mail carrier and later a postmaster in Park River and Drayton ND. Along with those jobs he was also an entrepreneur, operating Lusty Sharpening Service out of his garage and Lusty Lures from the basement.

Gene and Luilla loved camping and traveling starting with tents when their family was young and upgrading to campers and eventually an Airstream; they joined the Airstream group and traveled around the United States making friends along the way. When he and Luilla retired they began traveling south to Texas each year. During the summers when back in ND or MN at Maple Lake Gene worked as an insurance crop adjuster. As they grew older, they chose to live fulltime in the Rio Grand Valley, TX. The last few years they enjoyed living together in an assisted living apartment.

Gene was a lifelong learner, always interested in learning a new skill or working on a new project. Over his lifetime he was a ham radio operator, hunter, snowmobiler, beekeeper, gardener, loved computers and financial investments and always learned everything he could about what ever interested him. He loved history including his own family history, so he wrote a book, Beyond the Prairie, about his family beginning with his mother homesteading in Montana.

Gene loved people and talking with people, he was a friend, a mentor, a guide to so many and always valued spending time with those around him. Even during the pandemic when he was limited to staying in their apartment he stayed in communications with friends and family by phone up until just days before he died.

Gene had a deep and abiding faith in God that he lived out through everything he did.

To order memorial trees or send flowers to the family in memory of Gene Lusty, please visit our flower store.