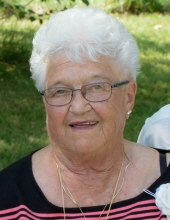 Geraldine Agnes, age 78, of Gully, MN, passed away on Friday, January 5th, at Essentia Living Center in Fosston. A Mass of Christian Burial will be held at 11:00 a.m. on Friday, January 12th, at St. Francis Xavier Catholic Church in Oklee, MN with Father Adam Hamnes presiding. Interment will be in St. Charles Catholic Cemetery, rural Trail, MN. Visitation will be held from 5:00 p.m. to 7:00 p.m. with a 7:00 p.m. prayer service on Thursday, January 11th and for one hour prior to the funeral Mass on Friday. All visitation will be held at St. Francis Xavier Catholic Church in Oklee. Arrangements are with the Carlin Funeral Home of Fosston and messages of condolence may be sent at www.carlinfuneral.com. Geraldine Mae Pladsen Agnes was born on April 18, 1939 in Gully, Minnesota to parents Leonard and Barbara Schneider Pladsen. She grew up north of Gully and graduated from Gonvick High School in 1957.Geraldine was united in marriage to Vincent Agnes on August 31, 1957. Together they had seven children that they raised on Geraldine's home place. Geraldine helped with farming, as well as working at Northern Pride in Thief River Falls, Minnesota for 18 years. After retirement, she worked at Peatland Reds and North Star Enterprises. Geraldine had many things that she was passionate about. She baked, gardened, crocheted, cooked, made lefse, and had the best donuts. She loved polka music and even played the accordion in a band in her younger years. She had numerous trophies from her champion bowling days. The thing she loved most though, was her family and her pets. She was most known as being everbody's "ma".Geraldine is survived by her children, Brian (Kelly) of Cotton, MN, Jerry of Gully, MN, Kevin of Gully, MN, Connie (Greg) Eck of Trail, MN, and Heidi (Noel) Wagner of Gully, MN; grandchildren, Sara (Branden) Hoeft, Amber (Randy) Agnes, Tyler (Katelyn) Agnes, Tianna Agnes, Tannen Agnes, Dustin (Melissa) Agnes, Josh (Jacquelyn) Agnes, Chase Agnes, Lexi and Laci Wagner, and Brianna (Dan) Aakre; great grandchildren, Haven, Morgan, Olivia, Camden, Bentley, Kade, Avery, Carson, Vincent, Emma, Oliver, Liam, Ryder, and Rayden. Nieces, nephews and cousins also survive.She was preceded in death by her parents; husband, Vincent on January 27, 2015; two sons, Dale and Jimmy; sisters, Marian and Sharon; and great granddaughter, Hallie.

To order memorial trees or send flowers to the family in memory of Geraldine Agnes, please visit our flower store.