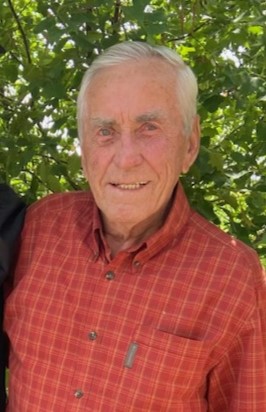 Glenn Bergerson, age 87, of Fosston, MN, and formerly of Gully, MN, passed away on Monday, December 19th, at Essentia Health Living Center in Fosston. Funeral services will be held at 11:00 a.m. on Wednesday, December 28th, at Bethel Assembly Church in Fosston with Pastor Seth Johnson officiating. Interment will be in Bethany Cemetery, rural Gully, MN, at a later date. Visitation will be held from 5:00 p.m. to 7:00 p.m. with a 7:00 p.m. prayer service on Tuesday, December 27th, at the Carlin Funeral Home in Fosston. There will also be reviewal for one hour prior to the service on Wednesday at the church. Military Honors will be provided by the National Guard Honors Team and arrangements are with Carlin Family Funeral Service of Fosston. Messages of condolence may be shared and a livestream of the funeral viewed at www.carlinfuneral.com.

Glenn Orlando Bergerson was born at his home in Johnson Township of Polk County, Minnesota to Bennie and Mabel (Sweno) on March 17, 1935.  He was fourth in birth order of nine siblings.

He attended Poplar Isle #241 for his elementary education and one year of high school in Gonvick.  He worked for many neighboring farmers including Jacob and Otto Anderson, Claude Knudson, Irvin Thoreson, Henry Sweno’s threshing crew, George Ness, Elmer Ness and John Nelson.  He was drafted into the US Army in March 1958 doing his basic training in Fort Carson, Colorado.  He traveled by ship to Munich, Germany where he was stationed for 19 months.  He was in Company A, 1st Battle Group 21st Infantry.  He earned the good conduct medal, 1st class gunner 81mm, sharpshooter badge-pistol, and sharpshooter badge-rifle.  He was discharged in March 1960.

He and his brothers, Duane and Floyd bought the family farm and raised beef cattle.  They ultimately bought more neighboring farm land so they could expand their herd and sell hay.  The methods of haying started out by overhead stacking that was leveled with pitchforks, then evolving into stack frames, and finally big bales.

Glenn started working at the Gully Farmers Union in 1966 where he worked in the station and the farm service tire truck. He was very well liked by the patrons as well as his co-workers. He left that job in 1985 to farm full time. He was baptized and confirmed at Bethany Lutheran Church of Gully.  He was currently a member of Bethel Assembly of Fosston and has served as an usher for many years.  Glenn was a Johnson Township board member for 37 years and served as chairman for many years.  He also served on the Gully Federal Credit Union board.

On November 25, 1983 he was united in marriage to Crystal Lundeen Carlson.  He always said he got a bonus with Travis and Kimberly coming into his life as a package deal.  He was an extremely good and generous dad and took Travis on his first deer hunting experience and fishing as well as introducing him to farm work.  Kimberly was able to talk him into doing all sorts of things and shopping by giving him that “look” that little girls know how to do.  Both Travis and Kimberly acknowledge that he was the best dad ever and respect and love him beyond words.

Then when the grandchildren came along he became an indescribable “grandpa”.

He would play ball and croquet, give 4 wheeler rides, give them rides on the tractor and have them along in the tractor during haying.  He would color with them, play school, or whatever they wanted him to do.

Deer hunting was an annual tradition for the Bergerson men.  The stories were reminisced about for years and maybe got a little changed through the years but provided many hours of enjoyment.  The inside walls of the sheds on the home farm are home to lots of antlers, each one has a story behind it.

Glenn will be remembered for his good nature, hearty laugh, honesty, generosity and good work ethic.  Blessed be his memory.

To order memorial trees or send flowers to the family in memory of Glenn Bergerson, please visit our flower store.
Open