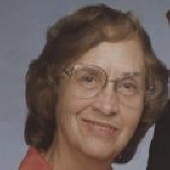 Grace Kintner, age 88, of Fosston, MN passed away on Sunday, February 14th at Essentia Health First Care Living Center in Fosston. Funeral services will be held on Saturday, February 20th at 10:00 AM at Hope Lutheran Church in Fosston with Rev. Paul Magelssen officiating. Visitation will be on Friday, February 19th from 5:00 to 7:00 PM with a prayer service at 7:00 PM at the Carlin-Hoialmen Funeral Home in Fosston. Interment will be in Wabanica Lutheran Cemetery at Baudette, MN, and the Carlin-Hoialmen Funeral Home of Fosston is in charge of the arrangements. Messages of Condolence may be sent to carlinhoialmen.com.Grace Florence Carlstedt was born on July 29, 1927 in Warren, Minnesota to parents Peter and Florence (Berg) Carlstedt. She was the sixth of ten children. Her father was a Lutheran minister who had several parishes. They moved to different towns and states with his ministry including Sandstone, Detroit Lakes and Kennedy, Minnesota and Vilas, Kansas.Grace graduated high school and went on to earn her BSN and worked as a nurse for many years, mainly at the VA in Des Moines, Iowa.She married Richard Kintner in 1954 and were married until death separated them in 2000. They adopted a daughter Karen Sue and she currently resides in Fosston, Minnesota.On Sunday, February 14, 2016 Grace went home to Heaven peacefully at Essentia Health First Care Living Center in Fosston at the age of 88 years.Grace is survived by her daughter, Karen and her husband Mike Norland, and grandson, Zachary all of Fosston; her brother, Jim Carlstedt of California; her sister, Rhoda Carlstedt of Florida; several sisters-in-law and brothers-in-law; and many nieces and nephews.She was preceded in death by her parents; her husband, Richard; and brothers and sisters.Blessed be her memory

To order memorial trees or send flowers to the family in memory of Grace Kintner, please visit our flower store.