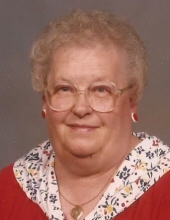 Grace Lee, age 93, of Virginia, MN and Fosston, MN, passed away on Thursday, June 1st, at the Virginia Care Center. Funeral services will be held at 1:00 p.m. on Friday, June 9th, at Poplar Lake Lutheran Church, rural Fosston, with the Rev. John Anderson officiating. Interment will in Faith Lutheran Cemetery, Mentor, MN. Visitation will be held for one hour prior to the service on Friday at the church. Arrangements are with the Carlin Funeral Home of Fosston and messages of condolence may be sent at www.carlinfuneral.com.She was born on August 13, 1923 in Fertile, MN to Edward and Martha (Bakken) Bertils, and was baptized by Rev. Haugland at Our Savior's Lutheran Church in Fertile. Grace was confirmed by Rev. Dr. Iver Iverson at Rodnes Lutheran Church in Erskine in 1937.Grace graduated from Mentor High School in 1942 and was united in marriage to Arthur Lee on September 2, 1945 at Hitterdahl Lutheran Church a few months after Art returned from serving with the Red Bull Division in World War II.They lived in various locations in Polk County, and with six children, finally landed on the Iron Range. Their backyard, located between Embarrass and Virginia, was often filled with children enjoying Pike River.Grace grew up with much music, singing her first solo at age 3. She continued her joy of music through her involvement in choirs and choir directing at various churches, including Gloria Dei and Our Savior's, serving as organist, singing at weddings and funerals, and helping with Pike School holiday programs. For many years she had the opportunity to sing in her first language, Norwegian, at numerous Sons of Norway events. Through that involvement, she eventually twice visited Norway and met distant relatives.Grace and Art had a gift for hospitality. So many friends, old and new, passed through their door to enjoy good company and great cooking and baking. Sometimes the entertainment would include some piano and singing. Grace, with only 7 fingers due to a farm accident, learned to play piano from her mother. She then used this skill for many decades to teach several children.Grace is survived by six children; Camille Schultz of Mt. Iron, Arthur Mark Lee of Biwabik, Maury (Graciela) Lee of Chula Vista, CA, Margaret "Peggy" (John) Heikkila of Tower, Debra Knowles of Anoka and Paul (Kay Lach) of Britt; 11 grandchildren, 24 great-grandchildren, 13 great-great-grandchildren, 2 sisters, Ellen (Underdahl) Gunderson and Irene (Harding) Vidden, 2 brothers, Paul Bertils and David (Elaine) Bertils, and numerous cousins, nieces and nephews.She was preceded in death by her parents; husband Arthur; brother Vernon Bertils, nephew Scott Bertils; and sons-in-law Howard Knowles and Gilbert Schultz. Blessed be her memory.

To order memorial trees or send flowers to the family in memory of Grace Lee, please visit our flower store.