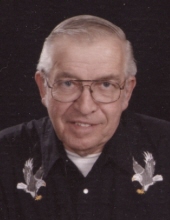 Grant Skarsten, age 73, of Fosston, MN, passed away on Sunday, September 3rd, at Essentia Hospital in Fosston. Funeral services will be held at 11:00 a.m. on Friday, September 8th, at Kingo Lutheran Church in Fosston with the Rev. John Ragan officiating. Interment will be in Kingo Lutheran Cemetery, Fosston. Visitation will be held from 5:00 p.m. to 7:00 p.m. with a 7:00 p.m. prayer service on Thursday, September 7th, at the Carlin Funeral Home in Fosston. There will also be reviewal for one hour prior to the service on Friday at the church. Military honors will be provided by the Spring Lake V.F.W. Post #2759 of Lengby and the National Guard Honors Team. Arrangements are with the Carlin Funeral Home of Fosston and messages of condolence may be sent at www.carlinfuneral.com.Grant Lowell Skarsten was born on May 25, 1944 in Wallace, Idaho to parents Elias and Laura Lundhagen Skarsten. He moved to Fosston after the death of his mother in 1949. Grant, along with his brothers Gary and James, were raised by Albert and Rose Skarsten. He graduated from Fosston High School in 1962.Grant entered the United States Army and served from June of 1965 until June of 1967 with thirteen months of that time spent in Korea. Grant was united in marriage to Beverly Nordlund on October 18, 1969. He worked at Land O' Lakes for two and a half years before he stared farming the family farm in Heier Township. In 1980, he did some carpentry and masonry work, worked at Northwoods in Solway and as a heavy equipment operator. He then attended Northwest Technical College in Bemidji for auto mechanics and graduated in 1990. At that time, he opened a repair shop on the farm that he operated until his retirement.Grant was a active member of Kingo Lutheran Church through the years. He served his congregation as President, Vice President and Secretary and several other committees. He was a member of the Fosston Jaycees, Fosston-Lengby Lion's Club, the Tangen-Walstrom American Legion in Fosston and the Spring Lake VFW in Lengby.Family was very important to Grant and he loved spending time with his children and grandchildren. To his grandchildren and great grandchildren, he was lovingly known as "Papa". He will be dearly missed.Survivors include his wife of 47 years, Beverly, of Fosston; three children, Carla Thompson, Melanie Skarsten, and Lloyd (LeAnn), all of Fosston; eight grandchildren, Cyril and Tyler Thompson, Alexis and Rachel Fleisher, Joe and Jasmine Skarsten, Jenna (Joey) Ward, and Tiffany Smith; two great grandchildren, Avery Thompson and Stryker Ward; two brothers, James (Micki) of Lancaster, CA and his twin brother, Gary of Braham, MN; and foster son, Aaron Bixby of Nashville, TN. Nieces, nephews and cousins also survive.He was preceded in death by his parents; step parents; half brother, Michael Skarsten; and half sister, Madelene Hinze.

To order memorial trees or send flowers to the family in memory of Grant Skarsten, please visit our flower store.