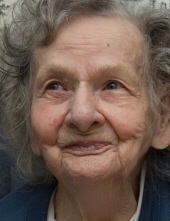 Hedwig Reindahl, age 96, of Fosston, MN, passed away on Wednesday, February 20th, at the Villa St. Vincent Nursing Home in Crookston, MN. Funeral services will be held at 1:00 p.m. on Wednesday, February 27th, at the Carlin Funeral Home in Fosston with Pastor Seth Johnson officiating. Interment will be in Clearwater Cemetery, rural Oklee, MN, in the spring. Visitation will be held for one hour prior to the service on Wednesday at the funeral home. Arrangements are with the Carlin Funeral Home of Fosston and messages of condolence may be sent to www.carlinfuneral.com. Hedwig "Hedy" Jane Sikora was born on March 6, 1922 in Kooi, Wyoming to parents Paul and Agnes (Malyurek) Sikora. She was raised on a ranch in Decker, Montana. She moved to Chicago where she met her future husband, Sidney, at a canning factory. She was united in marriage to Sidney LeRoy Reindahl on August 26, 1943 in Oklee, Minnesota. Shortly after their marriage, Sidney left to serve in the U.S. Army during World War II. After the war ended they began their life together in Story, Wyoming. In 1955, they moved to back to Minnesota and resided for two years with grandparents, Theodore and Valborg Reindahl. Then they lived in Vermillion Township, near Tower, Minnesota where Hedwig raised her family and Sidney worked in the mines. They moved to Fosston, Minnesota and bought a home in 2008. Sidney passed away on January 29, 2015 after 71 years of marriage. Hedwig lived at her home in Fosston until June 1, 2017 when she became a resident of Villa St. Vincent in Crookston, Minnesota.Hedy liked gardening, flowers, and definitely had a "green thumb". She always encouraged her family to continue their education. Hedy had a great love of classical old music. She played the accordion and dabbled with the piano. She loved to read until her vision no longer allowed reading. She was entertained by Harry Potter books which were written in Montana. Hedy loved seeing her grandchildren and great grandchildren growing up into responsible adults. Many gifts of money, books and baby clothes were bought for the many children.Survivors include two children, Sidney Reindahl, Jr. (Darlene) of Virginia, MN, and Sedona Reindahl-Fossand of Bemidji, MN; 12 grandchildren, Darryn (Dana) Fossand, Dana Erickson, Erica Fossand (Jenna), Jennifer (Nate) Ainsworth, Charles (Sarah) Hastings, Shannon Reindahl, Melanie Pearson, Wendy Pearson, Heidi Reindahl, Danielle Zika, Erin Reindahl, and Katrina Reindahl; and one sister-in-law, Dellys Rendal. Nieces and nephews also survive.Hedy was preceded in death by her husband, Sidney; her parents, Paul and Agnes Sikora; two children, Cheryl Hastings and Gene Reindahl; son-in-law, Charles Hastings; brothers and sister, Paul, Mary, Edward, and Joseph; sisters-in-law, Olga Dahlen, Corrine Roisland, Evelyn Lillo, and Gladys Reindahl; and brothers-in-law, Leonard, Kent, and Harold Reindal.May her memory be blessed.A special thank you to the staff of Villa St. Vincent for their wonderful care.

To order memorial trees or send flowers to the family in memory of Hedwig Reindahl, please visit our flower store.