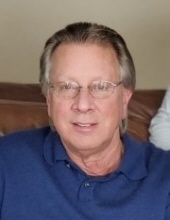 James "Jamie" Brown, age 67, of Walker, MN, passed away on Friday, October 30th, at the home of his daughter and son-in-law, Jenessa and Kevin Kiecker, near McIntosh, following a courageous battle with cancer. Funeral services will be held at 2:00 p.m. on Saturday, November 7th, at Rodnes Lutheran Church, rural Erskine, with the Rev. Joel Smeby officiating. Interment will be in the church cemetery. Visitation will be held from 5:00 p.m. to 7:00 p.m. with a 7:00 p.m. prayer service on Friday, November 6th, at Rodnes Lutheran Church. All Covid-19 guidelines will be observed and mask use is required. The visitation prayer service and the funeral service will be recorded and will be available for viewing on Sunday on the Carlin website. Arrangements are with Carlin Family Funeral Service of Erskine and messages of condolence may be shared at www.carlinfuneral.com. James Edward Brown was born on June 2, 1953 in Fosston, Minnesota to Bertle and Bernice (Paulson) Brown. He was baptized and confirmed at Rodnes Lutheran Church and graduated from Erskine High School in 1971. He was married to Joan Nesteby on October 1, 1977. James managed banks in Mentor and Kelliher, Minnesota and managed a financial services business in Bemidji. In 1993, he met Terry Myhre and they have been partners for the past 27 years. Jamie was currently living in Walker, Minnesota and was employed with Leech Lake Gaming. He held the position of manager and events coordinator for Northern Lights Casino in Walker and Cass Lake. Due to the progression of his cancer, he moved to McIntosh to live with his daughter, Jenessa, and her family.James enjoyed working; whether it was at his job or keeping up his yard, he was meticulous and detailed. He enjoyed sports throughout his life, especially baseball; playing it in his younger years and, now, playing catch with his grandchildren in the yard. He also had fond memories of his many motorcycle trips to Arizona and enjoyable times at the lake. He will be dearly missed.Survivors include his daughter, Jenessa (Kevin) Kiecker of McIntosh; son, Brett (Jodee) Brown of Mentor; grandchildren, Alec, Livaeh, Elsii, Crew, Koen, and Case Kiecker, Samantha (Tim) Nemechek, Nathaniel, Isaac, Jordan, Lucas, Caleb, Mariah, and Joseph Brown; two great grandchildren, Charlotte and Wyatt Nemechek; one sister, Julie (Jon) Clementson of Erskine; his partner, Terry Myhre of Walker; and nieces, nephews and cousins.He was preceded in death by his parents.

To order memorial trees or send flowers to the family in memory of James Brown, please visit our flower store.