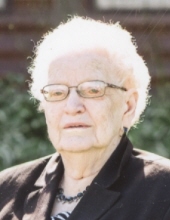 Jean Hanson, age 91, of Fosston, MN, passed away on Monday, November 13th, at Essentia Health Hospital in Fosston. Funeral services will be held at 1:00 p.m. on Friday, November 17th, at Kingo Lutheran Church in Fosston with the Rev. John Ragan officiating. Interment will be in St. John's Cemetery, rural McIntosh, MN. Visitation will be held from 5:00 p.m. to 7:00 p.m. with a 7:00 p.m. prayer service on Thursday, November 16th, at the Carlin Funeral Home in Fosston. There will also be reviewal for one hour prior to the service on Friday at church. Arrangements are with the Carlin Funeral Home of Fosston and messages of condolence may be sent at www.carlinfuneral.com. Jean Katherine Hanson was born in Erskine, Minnesota to Parents Thorvald and Esther Hagen on November 3, 1926. She was baptized and confirmed in the Lutheran faith at Norwegian Lutheran Church of America in Erskine. She grew up and attended school in Erskine.On June 2, 1945, Jean was united in marriage to Blain Hanson in McIntosh, MN. They made their home in McIntosh and later moved to Fosston, MN and began farming. In 1967, they bought and moved to the family farm North of Fosston. Jean was a wonderful homemaker. She was known for always having fresh, home baked goodies after school for her children and whenever company came to the home. She enjoyed bingo, cards, playing Rummikub and trips to the casino. She really enjoyed family get-togethers and spending time with her children, grandchildren and great-grandchildren.Jean is survived by five daughters, Cheryl (Marlly) Rue of Fosston, Bonnie (Roger) Hemmingsen of Fosston, Barb Lee of Fosston, Lorie (Kevin) Erpelding of Bemidji, Roxann (Bob) Aaberg of Bemidji; and four sons, Bruce (Denise) Hanson of Fosston, Richard (Liz) Hanson of Fosston, Lowell (Amy) Hanson of Bristol, WI and Kevin (Ann) Hanson of Fosston; 24 grandchildren, 23 great grandchildren and 3 great, great grandchildren. Also surviving is one brother-in-law, John Hanson, one niece and several nephews.She was preceded in death by her husband, Blain Hanson on October 27, 2005, by her parents, one son, Harlan; one daughter, Marilyn; four grandchildren, Baby Boy and Baby Girl Hemmingsen, Nick Aaberg, and Katelyn Erpelding; one son-in-law, Frances Lee, one sister, Joyce Hanson, and two brothers, Alfred Hagen and Merle Hagen.

To order memorial trees or send flowers to the family in memory of Jean Hanson, please visit our flower store.