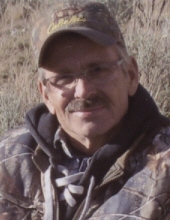 Jeff Ose, age 56, of Erskine, MN and formerly of Fargo, ND, passed away on Wednesday, October 18th, at his home in Erskine following a courageous battle with cancer. Memorial services will be held at 11:00 a.m. on Saturday, October 28th, at Grace Lutheran Church in Erskine with the Rev. Timothy Lundeen officiating. Interment will be in Fairview Cemetery, rural Erskine. Visitation will be held from 5:00 p.m. to 7:00 p.m. with a 7:00 p.m. prayer service on Friday, October 27th, at the Carlin Funeral Home in Erskine. Family will also greet friends for one hour prior to the service on Saturday at the church. Arrangements are with the Carlin Funeral Home of Erskine and messages of condolence may be sent at www.carlinfuneral.com. Jeffrey Lester Ose was born February 10, 1961 to Lester Obert and Donna Mae (Matzke) Ose in Fargo ND. He grew up in Fargo and attended Fargo South High School. He worked for various contractors in the Fargo area. He later moved to Erskine MN where he met his future wife Tami. Jeff and Tami were blessed with two amazing children, Tahlor Jeffrey (Son) and Jordyn Mae (Daughter). His children were the love of his life.During his time living in Erskine, Jeff owned his own lawn service and also worked for Danny Ness for many years. In 2010 he moved to Billings MT where he worked for Scotts Lawn Service. He, then, moved to Fargo ND in 2015 to be closer to his children. He worked for Rusco Windows in Fargo until he had to quit due to his illness in March of 2017. The family moved him to Erskine MN in September 2017 where they cared for him until the end. Jeff loved the outdoors along with hunting and ice fishing. He made many friends and had some great adventures while living in Montana including going to one of his favorite places- the Harmon cabin in East Rosebud MT. Jeff passed away on October 18th 2017 at the age of 56 years.Jeff is preceded in death by his parents and by both sets of his grandparents along with several aunts and uncles. He is survived by his son Tahlor Ose of Erskine MN, his daughter Jordyn Ose of Fargo ND, his former wife and friend Tami Ose of Erskine MN, his sister Connie Olson (Mark Harmon) of Billings MT and his niece Leslie Cadreau of Billings MT. Jeff will be dearly missed by his family and friends. We love you. God bless.

To order memorial trees or send flowers to the family in memory of Jeff Ose, please visit our flower store.