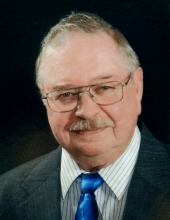 Jerald "Jerry" Berg, age 78, of Fosston, MN, passed away unexpectedly on Thursday, January 2nd, at his home. Funeral services will be held at 2:00 p.m. on Friday, January 10th, at Kingo Lutheran Church in Fosston with the Rev. John Ragan officiating. Interment will be in Kingo Lutheran Cemetery, Fosston, in the spring. Visitation will be held from 5:00 p.m. to 7:00 p.m. with a 7:00 p.m. prayer service on Thursday, January 9th, at the Carlin Funeral Home in Fosston. There will also be reviewal for one hour prior to the service on Friday at the church. Military honors will be provided by the Naval Honors Team and arrangements are with Carlin Family Funeral Service of Fosston. Messages of condolence may be sent at www.carlinfuneral.com.Jerald Lee Berg was born on December 17, 1941 in Mankato, Minnesota to parents Emil and Mabel (Dyrdahl) Berg. He graduated from Fosston High School in 1959. In the summer following graduation, Jerry worked as a hired man for his uncle, Hjalmer Berg. In November of 1959, Jerry and his friend, Joe Bauer, joined the United States Navy under the buddy system. After Boot Camp he attended Engine Man A School. From there he was stationed in San Diego, California on a sea going tug. During this time he made a west-bound voyage to the Orient, where he visited the Philippines, Hong Kong, Japan, Okinawa, and Hawaii. After that trip, he was stationed in Kodiak, Alaska in the U.S. Special Forces as an Engine man overseeing equipment. In December of 1961, he received his honorable discharge from the Navy.Jerry came home for about nine months and later that year began working for Deward Motors in Crookston, Minnesota as a mechanic. He worked there for four years. In 1963, he enrolled in the General Motors Institute in Minneapolis. Shortly after completing the course work at the institute, Deward Motors became Nelson Motors and a short time thereafter, jerry left the dealership.Jerry then went to the Twin Cities where he worked road construction for a season. In August of 1967, he moved to Duluth, Minnesota and got a job as a wiper on the S.S. Irving S. Olds for U.S. Steel Corp. He continued to work on various vessels for U.S. Steel Corp. until 1972.In 1972, he enrolled in Marine Engineer School to upgrade his license. In March of 1973 he wrote his license for the Third Engineer. Over the years, he continued to attend various schools to upgrade his license to Chief Engineer. In 1991 he received his Chief's License.In 1976, he married Darlene (Bergh) Blasus and inherited two sons, Tory and Shannon Blasus. In 1982, they became foster parents to a Native American child, Kieron "Duffy" Brown. In retirement during the winter months, he continued to work as a Maintenance Engineer on various ships traveling between Green Bay and Superior, Wisconsin for Central Marine Logistics. The rest of his retirement was spent gardening, traveling, playing cards and completing his "Honey-Do List".Survivors include his wife, Darlene, of Fosston; two sons, Tory Blasus (Felicia White) of Treasure Island, FL, and Shannon Blasus of Fort Collins, CO; grandchildren, Kaitlyn Blasus, Brittany Blasus, Christian Blasus, Amber Brown (Jeremy Rhode), Dustin Brown, Trevor Brown, Cheyenne Brown (Jeffrey Lacey), and Kennedy "Ethan" Brown; and great grandson, Carter Rhode.He is also survived by one brother, Dean (Beverly) Berg of Duluth, MN; and two sisters, Jennifer (Terry) Sylvester of Oklahoma, Brenda (Wayne) Ringstad of Duluth, MN, and Karla Curfman of Fosston. Many nieces, nephews and cousins also survive.He was preceded in death by his parents; stepson, Kieron "Duffy" Brown; and two sisters, Kathy Smith and Karen Evenson.

To order memorial trees or send flowers to the family in memory of Jerald Berg, please visit our flower store.