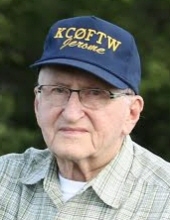 Jerome Voxland, age 83, of McIntosh, MN, passed away on Wednesday, February 22nd, at Essentia First Care Living Center in Fosston. Funeral services will be held at 11:00 a.m. on Wednesday, March 1st, at Trinity Free Lutheran Church, rural McIntosh with the Rev. Alan Arneson and Rev. Karl Anderson officiating. Interment will be in the church cemetery. Visitation will be held from 5:00 p.m. to 7:00 p.m. with a 7:00 p.m. prayer service on Tuesday, February 28th, at the Carlin Funeral Home in Fosston. There will also be reviewal for one hour prior to the service on Wednesday at the church. Arrangements are with the Carlin Funeral Home, serving McIntosh. Messages of condolence may be sent at www.carlinfuneral.com.Melford Jerome Voxland was born on June 29, 1933 in Lessor Township, rural McIntosh, Minnesota to parents Halvor and Caroline Klemmetson Voxland. He was baptized and confirmed at Trinity Lutheran Church and attended Hillside country school through the eighth grade. He then went to McIntosh High School and graduated in 1951. In 1954, he moved to Brady, Montana where he got a job as a farm hand on a grain farm.Jerome entered the United States Army in 1958. He trained as a truck driver and was stationed in Hawaii. He received his honorable discharge in December of 1959 and returned to McIntosh.Jerome was united in marriage to Bernice Syverson on July 22, 1961 at Vernes Lutheran Church. Together, they operated a dairy farmed and raised their three children, Mechelle, Theresa, and Michael on their farm in Lessor Township. They retired from dairy farming on the last day of December 1996 and turned the farm operation over to their son, Michael. Even though he semi-retired, he never truly left farming. Jerome and Bernice moved to their new home in 1998 where they have since resided. Being active in the community was a meaningful part of Jerome's life. He was a life-long active member of Trinity Lutheran Church where he served as Secretary, Trustee, Deacon and President. He served on the Oklee Midland Co-op Board of Directors, Oklee Creamery Board, East Polk County Dairy Herd Improvement Association, American Dairy Association Board of Directors, McIntosh-Winger School Board for 12 years, and Pine to Prairie Vocational Board representing McIntosh-Winger School and was on the Lessor Township Board for 27 years.Jerome and Bernice received the East Polk County Soil and Water Conservation Farmer's award and were selected by the Governor as a Century Farm in 2010. Jerome enjoyed farming throughout his life, operating his ham radio and writing and publishing a book about his life. He and Bernice were dedicated followers of their grandchildren's sporting events and loved spending time with their family.Survivors include his wife of 55 years, Bernice; three children, Mechelle Voxland of Fosston, Theresa (Chris) Eitemiller of Woodbury, MN, and Michael Voxland of McIntosh; 9 grandchildren, Afton (Christian) Penner, Justine Hubbard, Jennal Hubbard, Tess Hubbard, Jaclyn Hubbard, Daniel Eitemiller, Elijah Eitemiller, Matthew Voxland, and Jason Voxland; one sister, Jordis (Robert) Dotson of Dalton Gardens, ID. Nieces, nephews, cousins, brothers-in-law, and sisters-in-law also survive.He was preceded in death by his parents; and five siblings, Luella (Sherwood) Wignes, Evelyn (Walt) Lambert, Hazel (Melvin) Nelson, Ardell (Alvin) Ostgarden, and Harlan Voxland.Honorary Pallbearers: Terry and Claudette Erholtz, Herman and ReMar Voxland, Ken and Karen Bittner, and Chuck and Ardell Redder.Active Pallbearers: Ron Wignes, Jim Lambert, Rick Lambert, John Nelson, John Voxland, and Bruce Grundyson.

To order memorial trees or send flowers to the family in memory of Jerome Voxland, please visit our flower store.