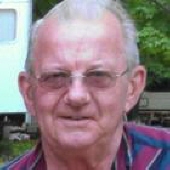 Joel Thormodsgard, age 71 from Union Lake Sarah Campground, rural Erskine, MN passed away on Thursday, November 20th at Mountain Vista Medical Center in Mesa, AZ. Military funeral services will be held on Saturday, December 6th at 4:00 PM at Grace Lutheran Church in Erskine with Rev. Timothy Lundeen officiating. Visitation will be held for one hour before the funeral at the church on Saturday afternoon beginning at 3:00 PM. Lunch and refreshments to follow the funeral at the church. The Carlin-Hoialmen Funeral Home of Erskine is in charge of the arrangements, www.carlinhoialmen.com. Condolences may be sent to: 20049 Campground Rd SE, Erskine, MN 56535.Joel Norris Thormodsgard was born on May 11, 1943 to Norris and Raeburn (Randall) Thormodsgard in Bismarck, ND. Joel attended grade school in Bowden, ND and a little country school near Canton, SD. He graduated from Canton High School in 1961.On January 11, 1962 Joel became a dedicated member of the United States Air Force. During an assignment to K.I. Sawyer AFB, MI Joel found the young woman he would spend the rest of his life with. Joel and Charlene "Charlie" Mercier were married January 18, 1964 in Garden, Michigan before being deployed to Japan. Joel retired in 1988 as a Chief Master Sergeant after 26 years of faithful service to our country. Joel and Char enjoyed 50 wonderful years together prior to his passing.Joel's hobbies included camping, touring the US in their RV, watching his favorite sports on TV, Fox News, woodworking, and visiting with his dear friends and family.On Thursday, November 20, 2014 Joel passed away at Mountain Vista Medical Center in Mesa, AZ at the age of 71 years.He was preceded in death by his mother in 1996, his father in 2000, sister-in-law Debbie (Hudson) Thormodsgard in 1993 and his grand nephew Brady Dean in 1993.Grateful for having shared his life are his wife Charlene and their two sons and daughters-in-law: Dale (Patti) Thormodsgard, Erskine, MN; Chop (Penny) Thormodsgard, Eatonville, WA; four grandchildren Tiffani, Kyrstan, Jessica, and Joel; two great grandchildren, Carson and Dallon; one brother Danny (Dee) Thormodsgard; two sisters Mary (Bill) Bretey, Linda (Dale) Helenius; and several nieces and nephews whom he loved with all his heart.

To order memorial trees or send flowers to the family in memory of Joel Thormodsgard, please visit our flower store.