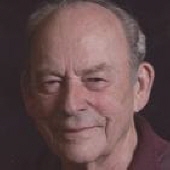 John "Jack" M. Dahl, age 84 of Fosston, MN passed away on Wednesday, May 6th surrounded by his family at his home in Fosston, under the care of Hospice. Memorial services will be held on Tuesday, May 12th at 2:00 PM at Kingo Lutheran Church in Fosston with Rev. Aage Carlsen and Rev. Dan Cole officiating. Visitation will be on Monday from 5:00 to 7:00 PM with a prayer service at 7:00 PM at the Carlin-Hoialmen Funeral Home in Fosston and visitation will continue for one hour before the memorial service at the church on Tuesday afternoon. Interment of cremains will be in Ringsaker Cemetery at Pelican Rapids at a later date. The Carlin-Hoialmen Funeral Home of Fosston is in charge of the arrangements. Messages of condolence may be sent to carlinhoialmen.com.John "Jack" Martin Dahl was born to parents John and Emma (Scheerer) Dahl in Westwood, California on March 22, 1931. Jack graduated from Fosston High School with the Class of 1950 in Fosston, Minnesota. He served in the United States Army from June 19, 1952 until receiving his Honorable Discharge on May 24, 1954.Jack and Ardi were united in marriage on April 23, 1960 at Congregational Church in Duluth, Minnesota. They lived in Fosston, where he worked in the family bakery and later was a self employed carpenter. He enjoyed hunting, camping, baking, reading, and telling jokes. He especially liked walking his dog Pepper and spending time with family. He was a member of Kingo Lutheran Church and the American Legion. Jack loved to volunteer his time at the Fosston Embassy, receiving a certificate of recognition from the mayor. His favorite (famous) saying was "It'll cost ya a quarter".On Wednesday, May 6, 2015 Jack passed away surrounded by his family at his home in Fosston, and under the care of Hospice at the age of 84 years.Jack is survived by his wife, Ardi; a brother, Danny; daughters, Leslie (Gary) of Mayville, ND and Laura (Tim) of Crookston, MN; grandchildren, Kelly (Shawn), Beka, Amy (Pat), Mark (Amber) and Holly; and great grandchildren, Andrea (Craig), Marlene, Peyton, Gradie and "little" Jack, named after grandpa Jack.He was preceded in death by his parents and two sisters.Jack will be greatly missed by all who knew him.Blessed be his memory

To order memorial trees or send flowers to the family in memory of John Dahl, please visit our flower store.