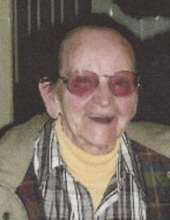 Joyce Tessman, age 94, of McIntosh, MN, passed away on Tuesday, April 11th, at McIntosh Senior Living. Funeral services will be held at 4:00 p.m. on Saturday, April 15th, at Immanuel Lutheran Church in McIntosh with the Rev. John Anderson officiating. Interment will be in Immanuel Lutheran Cemetery, McIntosh. Visitation will be held from 5:00 p.m. to 7:00 p.m. with a 5:30 p.m. prayer service on Friday, April 14th, at the McIntosh Community Center. There will also be reviewal for one hour prior to the service on Saturday at the church. Arrangements are with the Carlin Funeral Home, serving McIntosh and messages of condolence may be sent at www.carlinfuneral.com.Joyce was born on August 20th, 1922, and adopted and raised by Oscar and Selma Anderson. She attended school at a rural school near Fertile and grew up on the family farm with her five siblings.Joyce loved outdoor activities, including hunting and fishing with her brothers. Her camaraderie with her brothers extended to other adventures as well. Once they built a boat together. Unfortunately, between the building and sailing, and unbeknownst to Joyce and her brothers, the floor of the boat became the recipient of some bullet holes - holes that made their presence known during (and caused a panicked escape from) the next voyage.Joyce married Carl Tessman on November 30, 1943. Carl and Joyce moved to the McIntosh area and worked on McMahus Dairy Farm for several years. Eventually they purchased their own farm and continued working together until Carl's retirement. Joyce was an eager farmer's wife; the hard, repetitive, and unpredictable life on a farm never deterred her or dampened her feisty sense of humor. When Carl retired, they moved into McIntosh and Joyce continued to work, first as a bartender in Fosston, and later selling pull tabs at the club in McIntosh.Joyce's love for family and friends was one of her defining characteristics, but her sense of humor will live in the memory of everyone who knew her. Joyce was a known prankster and tease: she loved to surprise anyone, old bar friends or grand-nieces and nephews, with anything from witty joking to pranks, like a shiny new "lighter" that produced a "nice blue flame", per Joyce's description, but instead delivered a small electric shock.Joyce Tessman of McIntosh, MN passed away on April 11th, 2017 at McIntosh Senior Living.Joyce is preceded in death by her husband, Carl Tessman, her parents, Oscar and Selma, and her siblings: Irene Conners, Margaret (John) Thorton, Carston (Laurel) Anderson, Merten Anderson, and Paul (Bea) Anderson.She is survived by Laurel Anderson, Bea Anderson, and several nieces and nephews.

To order memorial trees or send flowers to the family in memory of Joyce Tessman, please visit our flower store.