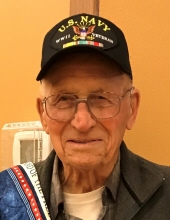 Keith Caskey, age 94, of Fosston, MN, passed away on Tuesday, November 17th, at Essentia Health Living Center in Fosston. Funeral services will be held at 2:00 p.m. on Saturday, November 21st, at Hope Lutheran Church in Fosston with the Rev. Jane Ekholm officiating. Interment will be in Hope Lutheran Cemetery. Visitation will be held from 5:00 p.m. to 7:00 p.m. on Friday, November 20th, and for one hour prior to the service on Saturday afternoon. There will be no visitation prayer service on Friday evening. The committal service and U.S. Navy military honors will be held at approximately 3:00 p.m. at Hope Lutheran Cemetery following the service. Due to the pandemic, those attending the visitation are encouraged to show support for the family and continue through the church. Limited numbers will be allowed in the church for both the visitation and funeral service. All Covid-19 protocol will be observed, including social distancing and mandatory mask use. The service will be recorded and available on Sunday on the Carlin website. Arrangements are with Carlin Family Funeral Service of Fosston and messages of condolence may be shared at www.carlinfuneral.com.James Keith Caskey was born on October 6, 1926 in Sutherland, Iowa to parents Edward and Ethel (Rumper) Caskey. He grew up at Camp Rabideau, a Civilian Conservation Corps camp, near Blackduck, Minnesota and he attended a one-room country school. Keith entered the United States Navy in January of 1945. He served during World War II on the maintenance crew on the USS Wyoming. He received his honorable discharge at the end of the war with the rank of Fireman First Class and returned home. After the service, Keith worked as a cab driver in Bemidji where he met his future wife, Katherine, during a cab ride.Keith was united in marriage to Katherine Opal Solsten "Kiki" on April 13, 1952 in Moorhead, Minnesota. During the first years of their marriage, they lived in a rail boxcar while Keith worked for the railroad operating heavy equipment. They eventually made their home in Fosston where Keith started working for his father-in-law, Otto Solsten. By trade, Keith was a mechanic, welder, and heavy equipment operator. He worked on the Minute Man missile sites in North Dakota and helped with the beginnings of mining on the Minnesota Iron Range. He was well-respected as a welder throughout the area. He retired in 1988 but he remained employed for area farmers for many years after his retirement. Keith was a member Hope Lutheran Church in Fosston, and a member of the American Legion for over 58 years; and a proud member of the Local 49ers. Keith was also a member of the Masonic Lodge 141 in Crookston where he was Initiated on May 15, 1979, Passed on March 3, 1981, and Raised on May 11, 1981. Since that time, he has been a continuous silent supporter of the Masonic principals. Many remember Keith as the electronic time-keeper for the Fosston Area Saddle Club for every area show from the late 1960's until the early 1980's.He enjoyed ice fishing (especially spearing) and deer hunting and he always had fish and venison in the house. In his later years, Keith really enjoyed baking. His Date Banana Nut Bread and Pineapple Pie were a couple of family favorites. He was also extremely proud of his red Ford mechanics truck.Keith passed away peacefully with his family by his side on Tuesday, November 17, 2020 at Essentia Health Living Center at the age of 94 years.Survivors include one son, Doug (Mary) Caskey of Richmond, MN; daughter, Deb Blanchard of Middle River, MN; four grandchildren, Danielle (Brian) Kammermeier, Angela (Kirk) Grannes, Catie (Jeff) Deutsch, and Ryan (Mariah) Blanchard; great grandchildren, Abagail and Olivia Kammermeier and Ava and Charlie Grannes; two sisters, Judy Scott of Loma, CO, and Shirley Smith of Warner, SD; brother and sister-in-law, Orlan "Tubby" and Eileen Solsten of Fosston; several nieces and nephews and other family members.He was preceded in death by his wife of 67 years, Katherine "Kiki" on May 12, 2019; his parents; an infant brother; siblings, Geri, Pat, Boots, and Sue; and brother and sister-in-law, Duane and Irene Erickson.

To order memorial trees or send flowers to the family in memory of Keith Caskey, please visit our flower store.