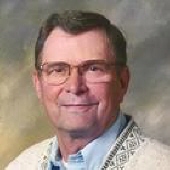 LeRoy "Bud" Hamre, age 81, of Erskine, MN, passed away on Wednesday, April 22nd, at his home. A memorial service will be held at 11:00 a.m. on Monday, April 27th, at Grace Lutheran Church in Erskine with the Rev. Timothy Lundeen officiating. Interment will be in Fairview Cemetery, rural Erskine. Visitation will be held from 5:00 p.m. to 7:00 p.m. with a 5:30 p.m. prayer service on Sunday, April 26th, at Grace Lutheran Church in Erskine. Military honors will be provided by the Bailey-Throne American Legion Post #596 of Erskine and the National Guard Honors Team. Arrangements are with the Carlin-Hoialmen Funeral Home of Erskine and messages of condolence may be sent at www.carlinhoialmen.com. LeRoy Clifton Hamre was born on July 4, 1933 in Lessor Township, rural Erskine, Minnesota to parents Bennie and Mabel Hamre. He was baptized and confirmed in the Lutheran faith at Grace Lutheran Church in Erskine. He grew up in Lessor Township and graduated from Erskine High School in 1951. Bud worked in the Erskine area until he entered the United States Army in March of 1956. He served in active military duty until December of 1957 and then continued his service in the Army Reserve for several years. Bud was united in marriage to Amy Elizabeth Nikolayson on June 27, 1959 at Grace Lutheran Church. At that time, Bud was employed with the Minnesota Highway Department (MNDOT) in Mankato, Minnesota. They lived there for a year before transferring to the Crookston, Minnesota location where he worked as a mechanic and shop supervisor. They moved to their home near Erskine in 1988 and Bud retired from MNDOT in 1990. They lived and enjoyed their retirement years at their home near Erskine. Amy passed away on February 9, 2003. Bud was a life-long member of Grace Lutheran Church and a member of the Bailey-Throne American Legion Post #596 of Erskine. He liked hunting and fishing; time spent on his tractor and working in his barn and shop. Bud was a gentle soul who was always willing to lend a helping hand to anyone. Most of all, he loved the time spent with his family.Bud is survived by his son, Wayne (Marie) Hamre of Bemidji, MN; daughter, Teresa (Bruce) Nelson of Lake Park, MN; four grandchildren, Aaron and Benjamin Hamre and Mason and Laina Nelson; four siblings, Don (Bev) Hamre of Erskine, Marlys (Eivind) Lindseth of McIntosh, MN, Bennett (Janet) Hamre of Erskine, and Elaine (Mitch) Olson of Pelican Rapids, MN; brother-in-law, Dennis (Marcy) Nikolayson of Erskine; sisters-in-law, Clara Hamre of Erskine, and Shirley Hamre of Wadena, MN;and many nieces and nephews.He was preceded in death by his wife; his parents; brothers, Eugene, Byron and Samuel; and sister-in-law, Millie Hamre.

Please click here to view the video tribute
To order memorial trees or send flowers to the family in memory of LeRoy Hamre, please visit our flower store.