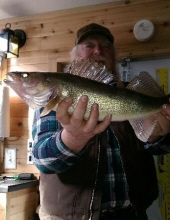 Leslie Neset, age 65, of Fosston, MN, passed away on Wednesday, March 7th, at Essentia Health Hospital in Fosston. Funeral services will be held at 2:00 p.m. on Thursday, March 15th, at Hope Lutheran Church in Fosston with the Rev. Paul Magelssen officiating. Interment will be in Hope Lutheran Cemetery in the spring. Visitation will be held for one hour prior to the service on Thursday at the church. Arrangements are with the Carlin Funeral Home of Fosston and messages of condolence may be sent at www.carlinfuneral.com. Leslie James Neset was born on February 23, 1953 in Fosston, Minnesota to parents Edward and Grace Prestegard Neset. He grew up in Fosston and graduated from Fosston High School in 1971. Following high school, Les went to work for American Crystal in Crookston. He was employed there until 1985 when his father passed away and he took over the farm with his brother, David. Les and David had dairy and farmed small grains together for many years. Les enjoyed fishing, watching animals, nature and being outdoors. He had a passion for farming and was a very good mechanic. He was known as a "jack of all trades". He will be dearly missed by his family and friends.Survivors include one daughter, Emily Grace; and one son, Matthew David; brother, David Neset (Patty Jo) of Fosston; special friend, Roxanne Grenz of Thief River Falls, MN; and niece, Sadie Mae. Cousins also survive.He was preceded in death by his parents and grandparents.

To order memorial trees or send flowers to the family in memory of Leslie Neset, please visit our flower store.