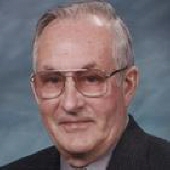 Lloyd Dufault, age 86, of Fosston, MN, passed away on Sunday, August 30th, at First Care Living Center in Fosston. A Mass of Christian Burial will be held at 11:00 a.m. on Friday, September 4th, at St. Mary's Catholic Church in Fosston with Father JohnMelkies Suvakeen officiating. Interment will be in the church cemetery. Visitation will be held from 5:00 p.m. to 7:00 p.m. on Thursday, September 3rd, at St. Mary's Catholic Church. The Rosary will be prayed at 6:30 p.m. followed by a 7:00 p.m. Wake Service. There will also be visitation held for one hour prior to the service on Friday morning at the church. Arrangements are with the Carlin-Hoialmen Funeral Home of Fosston and messages of condolence may be shared at www.carlinhoialmen.com.

Lloyd Louis Dufault was born on November 27, 1928 in rural Gentilly, Minnesota to parents Daniel and Alice (Regeimbal) Dufault. Lloyd and his twin brother, Donald, were the older brothers to six sisters. He attended rural grade school, high school at the Agriculture College (A.C.) in Crookston, and Aakers Business College in Grand Forks.His first job was at the ASC office in Crookston.  In 1951 he went to work at Crookston Implement. It was during this time he met Lucille Roy and they were married on June 22, 1957 at St. Joseph's Church in Red Lake Falls. In 1969, he purchased Fosston Implement and moved to Fosston. Church and community were very important to Lloyd.

He was on St. Mary's finance committee, and was a trustee, usher, and greeter for over 30 years. In the community, he was involved in the City Utility Commission, Community Club and Fair Board. For leisure, he bowled on a league in Bagley and played whist with the card club. He also enjoyed attending his grandchildren's activities. He looked forward to "coffee time" with his friends. He liked to read local newspapers, farm publications and listen to the Greyhounds with Tom Lano announcing over the radio.

To order memorial trees or send flowers to the family in memory of Lloyd Dufault, please visit our flower store.