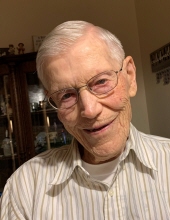 Lloyd Schlacher, age 100, of McIntosh, MN, passed away on Monday, January 11th at Sanford Medical Center in Bemidji, MN. Funeral services will be held at 2:00 p.m. on Saturday, January 16th, at Immanuel Lutheran Church in McIntosh with the Rev. Bruce Blocker officiating. Interment will be in Immanuel Lutheran Cemetery. Visitation will be held for one hour prior to the service on Saturday at the church. The public is welcome to attend with social distancing and masks required. The funeral will be live-streamed on the Carlin website and also uploaded following the service. In lieu of flowers, memorials are preferred to Poplar Meadows Gazebo Fund or Immanuel Lutheran Church. Arrangements are with Carlin Family Funeral Service of McIntosh and messages of condolence may be shared at www.carlinfuneral.com.

Lloyd Bertel Schleicher was born July 15, 1920 on the Schleicher farm in Lessor Township to parents Arthur and Elsie (Roth) Schleicher. He was baptized and confirmed and Immanuel Lutheran Church in McIntosh and has been an active member of that church his whole life, as a Sunday school teacher, church council member, church President, usher, elder and member of the male and mixed choirs. He attended grade school in District 189 in Lessor Township and graduated from McIntosh High School in 1938.

He married Gladys Simonson on July 10, 1943 and they were blessed with 64 years together until her death in 2007. Besides being a dairy and small grains farmer, Lloyd was also active in many community organizations. He served as president of the Creamery Board, President of the Mac Co-op board and Vice President of the original McIntosh Housing Board. Lloyd had the top dairy herd in 1945 in East Polk Count Testing Association. In 1958, he and Gladys were recipients of the Red River Valley Dairyman's Award. After he sold the cattle in 1975, he was on the staff of NFO as Dairy Field Man and, later, coordinator for beef cattle. In 1972-73 Lloyd and Gladys hosted the first AFS student in McIntosh, Lorna Ferrer, from the Philippines. In 2016, he received recognition of the Schleicher farm as a Century Farm. The house on the farm is the very one in which he was born. Lloyd enjoyed a variety of hobbies and travels over the years. He enjoyed snowmobiling, fishing, bowling, golfing, dancing, and playing his father's violin while accompanied by his wife, Gladys, on the keyboard. Lloyd and Gladys traveled to Germany and Norway, enjoyed a 7-week Alaska travel adventure in their motor home, and spent 21 winters in the Arizona sunshine.

In 2016, Lloyd moved into an apartment at Poplar Meadows Senior Living. He enjoyed socializing with other residents, and especially enjoyed his time playing Pinochle with friends from the residence and the community.Lloyd passed away on Monday, January 11, 2021 at Sanford Medical Center in Bemidji at the age of 100 years, five months and 27 days.

To order memorial trees or send flowers to the family in memory of Lloyd Schleicher, please visit our flower store.