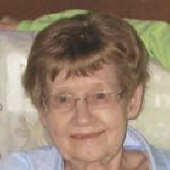 Lois Ostgarden, age 88, of Fosston, MN, passed away on Wednesday, August 12th, at Essentia Health Living Center in Fosston. Funeral services will be held at 11:00 a.m. on Monday, August 17th, at Kingo Lutheran Church in Fosston with the Rev. Dan Cole and Rev. Aage Carlsen officiating. Interment will be in Kingo Lutheran Cemetery, Fosston. Visitation will be held from 5:00 p.m. to 7:00 p.m. with a 7:00 p.m. prayer service on Sunday, August 16th, at the Carlin-Hoialmen Funeral Home in Fosston. There will also be reviewal for one hour prior to the service on Monday at the church. Arrangements are with the Carlin-Hoialmen Funeral Home of Fosston and messages of condolence may be shared at www.carlinhoialmen.com.Lois Mae Juvrud Ostgarden was born on May 9, 1927 in Fosston, Minnesota to parents Edwin and Agnes Juberg Juvrud. She attended school in Fosston and graduated in 1945. Went to college in Grand Forks, North Dakota and then later moved back to Fosston. She was married to Clarence Ostgarden on April 16, 1949 and had 4 children. They had just celebrated their 66th wedding anniversary!!Lois was a member of Kingo Lutheran Church and the Tangen-Walstrom American Legion Auxiliary Post #114 of Fosston.She was employed by the City of Fosston clerks office for many years, Gesell Concrete Products of Bagley, Nord's Pharmacy and Lenes Sand and Gravel.Lois enjoyed spending time with family. Especially her kids and grandchildren. She was an excellent cook and loved making Sunday dinners for us all! She and Clarence enjoyed cooking, baking and canning together in their later years.Lois passed away at the First Care Living Center in Fosston on Wednesday August 12, 2015 at the age of 88 years.She is survived by daughters, Gail (Glenn) Holweger of Grand Forks, ND and Carol (Larry) Lenes of Fosston. Grandchildren, Jill Halvorson (fiancé Jon Saari) of Rogers,MN, Christopher Smith of San Francisco,CA, Ryan Holweger of Grand Forks, ND, Justin (Twyla) Holweger of Grand Forks, ND and Aaron (Holly) Lenes of Fosston. Great grandchildren Sofia Halvorson, Clayton, Stella and Amelia Lenes and Ava and Annie Holweger. Nieces and nephews also survive.She was preceded in death by her parents; husband Clarence (May 17,2015); daughter Joanne Smith (2002); and son Jeff Ostgarden (2013).

To order memorial trees or send flowers to the family in memory of Lois Ostgarden, please visit our flower store.