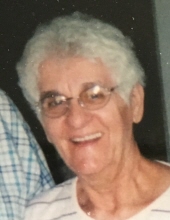 Lorraine Schendel, age 84, of Fosston, MN and formerly of Moorhead, MN, passed away on Wednesday, May 15th, at Essentia Health Living Center in Fosston. A memorial service will be held at 2:00 p.m. on Thursday, May 23rd, at New Journey Church in Fosston with the Rev. Josiah Hoagland officiating. Inurnment will be in Riverside Cemetery, Fargo, ND, at a later date. Visitation will be held from 5:00 p.m. to 7:00 p.m. with a 7:00 p.m. prayer service on Wednesday, May 22nd, at the Carlin Funeral Home in Fosston. Family will also greet friends for one hour prior to the service on Thursday at the church. There will also be a service at 2:00 p.m. on Friday, May 24th the United Methodist Church in downtown Fargo. Arrangements are with the Carlin Funeral Home of Fosston and messages of condolence may be sent at www.carlinfuneral.com. In lieu of flowers, memorials are preferred to Essentia Health Living Center or Essentia Hospice.Lorraine Verna Bengs Schendel was born (in a Model T on the way to the hospital) on August 21, 1934 in Reynolds, North Dakota to parents Walter and Verna Griese Bengs. She had four siblings: two brothers, Eugene and Alvin and two sisters: Ruby and Dorothy. Her childhood was filled with going to church, visiting neighbors and friends, and working on the farm, tending to the animals.Lorraine attended country school and then graduated from high school in Grand Forks. After high school, she went to nurse's training at WestMar College in LeMars, Iowa, graduating in 1957. After attaining her degree, she moved to Bismarck and began working as a nurse. Lorraine was united in marriage to John Schendel on June 6, 1959 at the Evangelical United Brethren Church in Holmes, North Dakota. After their marriage, they began their family in Bismarck, North Dakota. The family moved to Minot, North Dakota where John set up a Sherwin Williams Store and Lorraine worked as a nurse and at a church in town. They also spent time in Alexandria, Minnesota before health issues required them to move closer to family and medical care in Moorhead, Minnesota. After John passed away on July 16, 2013. Lorraine moved to Fosston and has lived for the past three years at Essentia Health Living Center in Fosston. Lorraine was active in church wherever she lived. She enjoyed spending time with her family.Survivors include her three children, John Jr. (Candy) of Bellevue, WA, Brian (Connie) of West Fargo, ND, and Jody (Nathan) Anderson of Gully, MN; grandchildren, Mandy and Melanie Schendel, Nate and Allie Schendel, Shelbie (Trevor) Wixo, Amber (Gene) Maske, and Nicholas Anderson (Callysta Logan); great grandchildren, Chad and Madeline Wixo, Natalie Maske and one on the way.Also surviving are siblings, Eugene (Betty) Bengs of Reynolds, ND, Ruby Schroeder of St. Hilaire, MN; and numerous nieces and nephews.She was preceded in death by her husband; parents; grandson, Joshua Anderson; sister, Dorothy; and brother, Alvin.

To order memorial trees or send flowers to the family in memory of Lorraine Schendel, please visit our flower store.