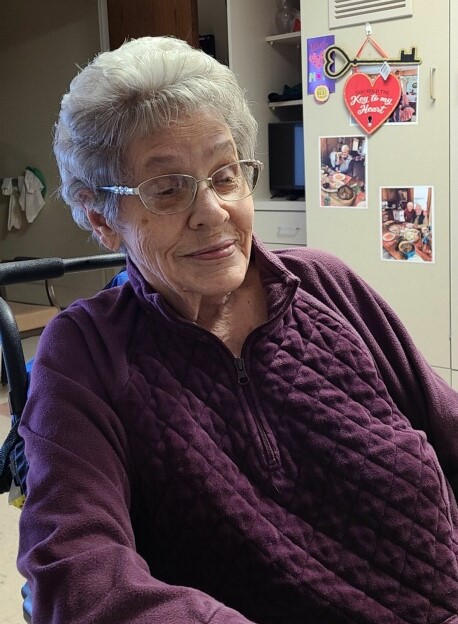 Lota Dietzler, age 87, of Fosston, MN, and formerly of Grand Forks, ND, passed away on Saturday, February 5th, at Essentia Health Living Center in Fosston. A memorial service will be held at 2:00 p.m. on Saturday, February 19th, at Hope Lutheran Church in Fosston with the Rev. Jane Ekholm officiating. Inurnment will be in Calvary Cemetery, Grand Forks, ND at a later date. Family will greet friends for one hour prior to the service on Saturday at the church. Arrangements are with Carlin Family Funeral Service of Fosston and messages of condolence may be shared at www.carlinfuneral.com.

Lota June Dietzler was born June 20, 1934 at home to Samuel and Florence (Krueger) Sleeth. She was the 2nd of ten girls in the Sleeth family. She attended Steinbrenner country school, Heier Township, then attended Fosston High School. On May 1, 1953, she married Walter Schamberger. They lived in Hoople, ND where Walt worked for Folsom Farms. To their union two children were born: Richard Wayne and Debra Jean. They then moved to East Grand Forks where Walt continued to work for Folsom Farms. When the children reached school age, Lota began her working years as a bookkeeper. She worked at a dry cleaners, Trenda Motors and Johnson Iron Works. She also volunteered as her children’s Scout Den Mother, Sunday School teacher and Bible School teacher.

Walt passed away on Jan 5, 1978. Lota married William Dietzler on Oct 25, 1980. They lived in Grand Forks, Watford City, ND and Delta Junction, AK. After living in AK, they returned to ND where Bill worked in a pawn shop in Watford City. They later bought that shop and Lota did the bookkeeping.

They sold the Watford City pawn shop and moved back to Grand Forks. In 1984 they opened the Silver Dollar Pawn Shop in South Grand Forks. Again, Lota did the book work and they both managed it. During that time she was diagnosed with lung cancer. She fought hard and beat cancer not once but twice. The Silver Dollar was then sold and they both retired to their home on Hiway 220 North in EGF. It was then that Lota started her many years of volunteer work with United Lutheran.

Lota was very talented. She loved to quilt and created many beautiful quilts and wall hangings. She belonged to the Quilters Guild and taught many quilting classes. She was an avid bowler and carried a 180 average. She crocheted beautiful afghans, doilies, and table coverings. And her oil paintings were amazing. Bill passed away Dec. 17, 2009. Lota continued to live in East Grand Forks for several years. When her dementia set in she moved to Poplar Meadows Assisted Living in McIntosh, MN where she resided until she moved to the Essentia Living Center in Fosston in Oct. 2019.

To order memorial trees or send flowers to the family in memory of Lota Dietzler, please visit our flower store.