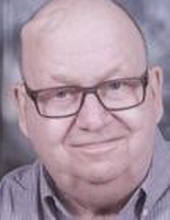 Lowell Haugen, age 74, of Fosston, MN, passed away on Thursday, January 5th, at his home in Fosston. Funeral services will be held at 11:00 a.m. on Monday, January 9th, at Hope Lutheran Church in Fosston with the Rev. Paul Magelssen officiating. Interment will be in Hope Lutheran Cemetery, Fosston. Visitation will be held from 5:00 p.m. to 7:00 p.m. with a 7:00 p.m. prayer service on Sunday, January 8th, at the Carlin Funeral Home in Fosston. There will also be reviewal for one hour prior to the service on Monday at the church. Arrangements are with the Carlin Funeral Home of Fosston and condolences may be shared at www.carlinhoialmen.com. Lowell Gene Haugen was born on February 12, 1942 in Fosston, Minnesota to parents Otto and Helen Vraa Haugen. He grew up in McIntosh, Minnesota and was baptized and confirmed in the Lutheran faith. He graduated from McIntosh High School in 1960 and from Bemidji State University in 1964. On September 7, 1963, he was united in marriage to Janice Svedahl. To this union three daughters were born and a son adopted. He taught school for 34 years, beginning in Roseau and Moorhead and spending most of his career in Fosston as an English teacher and librarian. After retirement, he enjoyed working as custodian at Hope Lutheran Church. He enjoyed camping, woodworking, building and collecting birdhouses, and rummage sales. He also enjoyed remodeling and heating the house with wood (including cutting wood, stacking wood, and carefully placing the wood in the fireplace). Please remember him as kind, patient, inventive, thoughtful, and responsible. He is survived by his wife of 53 years, Janice of Fosston; three daughters, Laurie (Dale) Stern of Arlington, MN, Lynnette (Ronnie Novacek) Renaud of Greenbush, MN, and Melissa (Eric) Murphy of Fosston; grandchildren, Alex Stern, Emily Stern, Brandy Renaud, Amanda Murphy, Abby Murphy, and Amaya Murphy; great grandchildren, Maverick Murphy, Aurora OLeary, and Owen Okstad. Also surviving is Lowells brother, Orvis (Debbie) Haugen of Grygla, MN; his mother-in-law, Lorraine Svedahl of Fosston; sisters-in-law, Norma Haugen of Red Wing, MN and Sandra (Stanley) Linsenmeyer of Marshalltown, IA; aunt, Minnie Smith of McIntosh; and many cousins, nieces and nephews; and his faithful dog, Tyler. He was preceded in death by his son, Scott; his parents; brothers, Melvin and Jerome; and his father-in-law, Manfred Svedahl.

To order memorial trees or send flowers to the family in memory of Lowell Haugen, please visit our flower store.