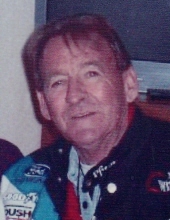 Lynn Lucken, age 75, of Winger, MN, passed away on Sunday, May 26th, at his home. Funeral services will be held at 11:00 a.m. on Friday, May 31st, at the Win-E-Mac High School Gymnasium in Erskine, MN with the Rev. Timothy Lundeen officiating. Interment will be in Dovre Free Lutheran Cemetery, rural Winger. Visitation will be held for one hour prior to the service on Friday at the high school. Arrangements are with the Carlin Funeral Home of Erskine and messages of condolence may be sent at www.carlinfuneral.com. In lieu of flowers, memorials may be designated to the Dovre Cemetery Fund.Lynn Myron Lucken was born to parents Lennie (Tice) and Myron Lucken on August 9, 1943, the third of four kids. In his early years in Mentor, Lynn started working on bicycles and by the age of 12, he bought a torch and cut scrap metal. He worked for Ray Ramberg Service Station until he graduated from Mentor High School in 1961. Post-graduation, Lynn got vocational training for auto body in Thief River Falls, and went on to start work at Harold Gilbertson's body shop in Fertile. Lynn & Sara were married December 29, 1962, and raised three children, Tal, Shelly, and Liberty. They moved to Winger in 1967 and purchased Clinton Balstad's salvage yard. After running the salvage yard for several years with his brother Earl, Lynn bought Earl out and launched Lynn's Auto, which he ran for over 45 years. While he officially "retired" after selling his business to nephew Jeff Lucken, his love for cars and deals remained. Lynn's extensive personal and business accomplishments include: serving as a charter member of the Winger Lions' Club; in 1983, Lynn, selflessly saved a young man from drowning in a pool in Portage La Prairie, Manitoba, for which he received the Royal Canadian Humane Association Award from the Queen; from 1990 to 2006, Lynn served on the board for Ultima Bank. Lynn's passions were cars and racing. His life-long racing career may have started around age 15 on local back roads, and ultimately included drag racing, dirt track racing, and truck pulling. He drove fast and turned left (even with one eye in his later years) until his health no longer permitted. He was inducted into the NOPA Hall of Fame in Grand Forks, ND in 2003 and into the Red River Co-op Speedway Hall of Fame in Winnipeg, Manitoba in 2012. Lynn shared his passion as a supporter and mentor to new generations of racers. Lynn was truly happy talking about all things cars. He was one of the founding members of the Highway 2 Cruisers nearly a decade ago. He was instrumental in bringing car aficionados from across the country to join the group and their many events, and in turn, was a constant supporter of his fellow Car Club members. Lynn was also an avid hunter. He enjoyed duck, deer, and elk hunting, both locally and in Montana and Wyoming with his extended family.Lynn is survived by his wife, Sara Lucken; children, Tal and Ardis Lucken, Shelly Lucken (Cindy Chinn), and Liberty Lucken (Erin Keyes); and proud granddaughters Talia Lucken and Ivy Lynn Lucken Keyes.

To order memorial trees or send flowers to the family in memory of Lynn Lucken, please visit our flower store.