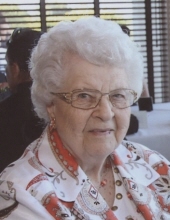 Mae (Anderson) Sielert, age 93, of Fosston, MN, passed away on Saturday, August 5th, at Essentia First Care Living Center in Fosston. Funeral services will be held at 2:00 p.m. on Wednesday, August 9th, at the Carlin Funeral Home in Fosston with the Rev. John Ragan officiating. Interment will be in Kingo Lutheran Cemetery, Fosston. Visitation will be held from 5:00 p.m. to 7:00 p.m. with a 7:00 p.m. prayer service on Tuesday, August 8th, at the Carlin Funeral Home in Fosston. There will also be reviewal for one hour prior to the service on Wednesday at the funeral home. In lieu of flowers, memorials may be directed to Kingo Lutheran Church or a charity of choice. Arrangements are with the Carlin Funeral Home of Fosston and messages of condolence may be sent at www.carlinfuneral.com. Mae Lorraine Anderson was born on August 30, 1923 in Bagley, Minnesota to parents Martin and Laura Strand Anderson. She graduated from Grand Forks Deaconess School of Nursing in 1944. She was a member of the Cadet Nurse Corp, in which she vowed to remain in nursing for the duration of World War II.After graduation, Mae went to California where she was employed by the Medical Department of Standard Oil Company of California (which is now Chevron) until her retirement in 1984. It was there that she met her husband, Harold. During her employment she was active in the American, Western, California, and Northern California Association of Occupational Health Nurses, in which she held many offices. In 1996 she and her husband moved to Mesa, Arizona where she enjoyed entertaining the many winter visitors from Minnesota and other states who wintered there. Mae and Harold moved back to Fosston in July of 2014. Harold passed away on March 6, 2017.Mae passed away on Saturday, August 5, 2017 at Essentia First Care Living Center in Fosston at the age of 93 years.Survivors include her son, Paul (Margaret) Sielert of Lengby, MN; granddaughter, Jennifer (Jose) Dominguez of Morgan Hill, CA; and a great grandson, DeAngelo Genovia; her brother, Norman (Ruth) Anderson of Fosston; and sisters-in-law, Aldora Anderson and Mavis Anderson, both of Fosston; and several nieces and nephews.She was preceded in death by her husband, Harold; her parents; and brothers, Robert and Warren Anderson.

To order memorial trees or send flowers to the family in memory of Mae Sielert, please visit our flower store.