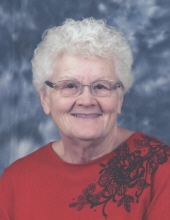 Marilyn Malmanger, age 77, of Gully, MN, passed away on Friday, September 22nd, at Prairie Pines Assisted Living in Fosston after a courageous battle with cancer. Funeral services will be held at 3:00 p.m. on Sunday, October 1st, at Hope Lutheran Church in Fosston with the Rev. Paul Magelssen officiating. Interment will be in Zion Lutheran Cemetery, rural Gully. Visitation will be held from 5:00 p.m. to 7:00 p.m. with a 7:00 p.m. prayer service on Saturday, September 30th, at the Carlin Funeral Home in Fosston. There will also be reviewal for one hour prior to the service on Sunday at the church. Arrangements are with the Carlin Funeral Home of Fosston and messages of condolence may be sent at www.carlinfuneral.com.  Marilyn Annette Courrier was born on July 28, 1940, in Albert Lea, Minnesota, to parents Arthur and Mildred (Wilkinson) Courrier. Marilyn lost her father when she was 10 years old and her mother later married Clifford Olson. She grew up in Walters and the Bricelyn/Brush Creek area in Minnesota and graduated from Bricelyn High School in 1958. She then attended Waldorf College in Forest City, Iowa and graduated with an Associates Degree in Education.  Marilyn was united in marriage to Earl Malmanger on May 29, 1960, at North Blue Earth Lutheran Church in Bricelyn, residing on a farm in the Bricelyn area. Her first year of teaching was in Frost, Minnesota, from 1960-1961. In 1963, they purchased a farm in Queen Township where they lived and raised their family. She continued her teaching career in Winger from 1965-1969, in McIntosh from 1969-1995, two years in the Erskine school building 1995-1997, and then the new Win-E-Mac school from 1997 until her retirement in 2005. She also taught a summer program in England in 1990. She returned to Win-E-Mac on a part-time basis after retirement in 2005 to participate in a special reading program. She also did substitute teaching for several years. In all, Marilyn was a teacher for 41 years. In addition to her teaching and raising her family, Marilyn completed her Bachelor's and Master's Degrees in Education from Bemidji State University. After her retirement from teaching, Marilyn began a new phase in her life. She completed her training as a lay minister and was invaluable to many area churches for much needed pulpit supply. Notably, she was at Faith Lutheran in Mentor, Grace Lutheran in Erskine and has been visitation minister at Hope Lutheran for many years. She has provided support for many grieving families at funerals and presided over several weddings. She continued to serve at Hope through April 2017 when she was having health issues. After Earl's death in 1991, Marilyn followed a calling to expand her missionary work. She went to British Columbia 5 times from 1992-1996 and Alaska 11 times from 2006-2016 to teach Bible school through the Lutheran Association of Missionaries and Pilots (LAMP) and Lutheran Indian Ministries (LIM). She taught VBS at Vernes Lutheran Church several times in the recent years. She also traveled to Haining, China 10 times teaching English.She was a member of Zion Lutheran Church from 1963 until its closing. She served in many ways including President, council member, organist, Sunday school and VBS teacher and superintendent, and ladies aid member. She was also a current member of Hope Lutheran Church.She enjoyed reading, camping, and traveling extensively in the U.S. and abroad. She hosted many foreign exchange students. Most of all, she treasured the time she spent with her family and friends.She is survived by her five children and their families, David (Debra) of Faribault, MN, and their children, Abigail, Gabrielle and Benjamin; Paul (Michelle) of Fargo, ND and their children, Brittany (Nathan) with Claire and William, Chelsey, Shelby and Emily; Mark (Julie) of Fosston and their children, Jacob and Micah; Kathy (Neal) Schmidt of Fosston and their children, Alyssa (Mike), Trevor and Kaili; and Kris (Dana) Engesather of Bemidji, MN and their son, Evan. Also surviving are two sisters, Barbara (Lyle) Rygh and Ardis (Dan) Knauf, both of Woodburn, OR; and one brother, Greg (Terri) Olson of Keizer, OR. Several nieces, nephews and cousins also survive. She was preceded in death by her husband, Earl; her parents; step-father, and niece, Jenna Knauf Boswell.Honorary Pallbearers: All the students whose lives she touched and those who touched hers.Active Pallbearers: Ross Roragen, Doug Johnson, Mike Roysland, Russ Horacek, Daryl Johnson, and Kevin Abrahamson.

To order memorial trees or send flowers to the family in memory of Marilyn Malmanger, please visit our flower store.