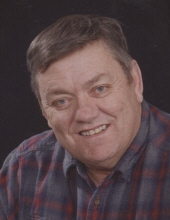 Mark Theodore Balstad, age 65, of Fosston, MN, passed away unexpectedly on Sunday, April 1st, at Heart of Florida Medical Center in Davenport, FL. Memorial services will be held at 2:00 p.m. on Monday, April 9th, at Kingo Lutheran Church in Fosston with the Rev. John Ragan officiating. Visitation will be held from 5:00 p.m. to 7:00 p.m. with a 7:00 p.m. prayer service on Sunday, April 8th, at the Carlin Funeral Home in Fosston. Family will also greet friends for one hour prior to the service on Monday at the church. Arrangements are with the Carlin Funeral Home of Fosston and messages of condolence may be sent at www.carlinfuneral.com. Mark Theodore Balstad was born September 20, 1952, in Mahnomen MN to Harold and Ione (Geldaker) Balstad. His two older brothers, Sonny (Harold Jr.) and John welcomed him. Mark was baptized and confirmed at Dovre Lutheran Church. He was a boy scout growing up and won the Pinewood Derby one year. He was raised on the family farm east of Winger where he attended elementary school. Mark was involved in a number of activities and clubs including the glee club. Mark attended high school in McIntosh graduating in 1970 with honors. Mark first attended Thief River Technical College before enrolling at Moorhead State University. Originally, Mark intended on being a teacher and went as far as student teaching before he realized the early mornings would never be for him. He then completed his Bachelors of Science in Political Science, graduating in 1975. With aspirations of studying law, he undertook and passed his entrance exams, before he was called back to the farm. Mark farmed for a few years, though he quickly learned his mind was in business. Mark was co-owner of Mark II of Fosston Inc. The company began in 1984 and contracted jobs throughout Minnesota and the greater Midwest before the partnership dissolved in 2008. Mark enjoyed crisscrossing the state, jamming to classic rock, checking on job sites, and talking with people. Mark was a long time resident of Island Lake, building his cabin there in 1983. He entertained family and friends, hosting the Balstad family picnic every Fourth of July. Countless memories were created at the cabin and on the lake throughout the years. Mark often opened his place to friends who needed a spot to stay for a while. Mark and Kay married February 20, 1999. Mark was the proud stepfather of Andrea, Jill, Beth, and Nathan. A bachelor before his marriage, he embraced his role as a father. He was supportive and proud of his relationship with his kids. In 1999, Mark and Kay built a new home in Fosston and resided there throughout their marriage. Mark also loved warm weather. He started traveling to the Orlando area with his good friends Butch and Gladys Gordon, and they purchased their first Florida homes next to each other. Mark and Kay acquired their current Davenport, FL home in 2001, with the intention of retiring there, a block away from close friends the Gordons and Todd Daniels. In the winter, one could find Mark welcoming family and friends into his home. He loved showing people the sights. A favorite spot was the car cruises in Old Town. Mark loved hot cars. One of his favorites being his ‘67 GTO. Back in Fosston Mark liked going for drives with good friends, and you'd often see one of his dogs riding with. He liked to burn rubber and had many friendships that were significant to him. He was a man with a big heart and anyone who knew him knows this and also the signature, "Balstad rock." In May of 2011, Mark had open-heart surgery where a pacemaker was also installed. Never fully recovering Mark chose to semi-retire. The gregarious person Mark was he had to stay busy, so he helped Kay with their A&W restaurant and their variety store/flower shop, TheoRose on Main/Rosemary's Garden. You'd often find him manning the front register at the A&W with a smile and always had a hearty greeting for everyone. He was good to run a flower delivery when called upon and could find the houses that even GPS couldn't locate. On April 1, 2018, Mark passed away unexpectedly with Kay by his side from heart complications in Florida where he always planned to retire. Mark is lovingly survived by his wife: Kay Balstad; four children: Andrea (Charlie) Anderson, Jill (Tim) Saeter, Beth Vigoren, and Nathan (Siri) Vigoren; nine grandchildren: Courtney, Caden, Angus, Gretchen, Braelyn, Lydia, Lucas, Amelia, and Leland; two brothers: Harold Jr. (Alice) Balstad and John (Sandy) Balstad; two brothers-in-law: Larry (Stefanie) Roed and Rick (Lorae) Roed; one sister-in-law: Eileen Bednarz; on Kay's side: sixteen nieces and nephews and thirty-four great-nieces and nephews; on Mark's side; one niece: Katherine Hedstrom; three nephews: Matthew Balstad, Sterling Balstad, and Luke Balstad; six great-nieces and nephews: Brooklyn, Braxton, Skye, Ari, Silas, and Asher; four aunts: Garnet Devine, Beatrice Balstad, Francis Syrdal, and MaryAnn Geldaker; and one uncle: Theodore "Shorty" (Karen) Geldaker.He was preceded in death by his parents Harold and Ione Balstad.

To order memorial trees or send flowers to the family in memory of Mark Balstad, please visit our flower store.