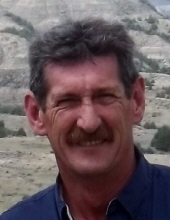 Mark Vedbraaten, age 61, of McIntosh, MN, passed away peacefully at home on Saturday, March 3rd, after a long battle with cancer. Funeral services will be held at 2:00 p.m. on Friday, March 9th, at Trinity Free Lutheran Church, rural McIntosh, with the Rev. Karl Anderson officiating. Interment will be in Rosehill Cemetery, Fosston, in the spring. Visitation will be held for one hour prior to the service on Friday at the church. Arrangements are with the Carlin Funeral Home, serving McIntosh and messages of condolence may be sent at www.carlinfuneral.com. Mark Allen Vedbraaten was born on February 19, 1957 in Fosston, Minnesota the youngest of five brothers to parents Lawrence and Adele Drellack Vedbraaten. Mark was baptized February 26, 1957 at Our Lady of Perpetual Help in Fosston (Currently St. Mary's) and confirmed April 18, 1971 at St. Francis Xavier in Oklee. He grew up in the Fosston area and attended Oklee High School.Mark was united in marriage to Ruby Stewart in 1977. Mark and Ruby had two children, Lynda and Michael. In the spring of 1985, Mark married Terry Young and they had three children, Christopher, Stacy, and Dustin. When Mark was a boy he began working by hauling milk for the family business. Mark continued with driving truck his entire life, working for several different local companies, as well as owning his own truck. Mark moved a variety of loads throughout his career including milk, gravel, grain, wind blades, and even snow from the township roads. Mark was an amazing husband, father, and grandfather. Mark could be found in the summer on the lake fishing, or on the patio enjoying time with family and friends. In the winter Mark shared a passion with his wife and children of snowmobiling. Day or night, Mark was up for a good cup of coffee and a visit with family and friends. Mark passed down a love for hunting and the outdoors to his children that were instilled in him from his father and brothers. He also was a fan of good old western movies and old country western songs. Mark loved cheering his children and later his grandchildren on the many sporting events at the local schools. Mark drove truck all his life, but his dream job was to be a farmer. He learned his love of farming while working with his uncles at a young age. Mark and Terry could be found many weekends in the summer working their large garden that they would grow. Mark would joke as he mowed the lawn or tilled that "this is the closest to farming I'll get".Mark passed away peacefully at home on Saturday, March 3, 2018, after a long battle with cancer, at the age of 61 years.He is survived by his wife, Terry Vedbraaten of McIntosh; five children, Lynda (Shawn) Couch of Nevis, MN, Michael (Sherrie) Vedbraaten of Thief River Falls, MN, Christopher (Amy) Vedbraaten of East Grand Forks, MN, Stacy (Derek) Roach of Mekinock, ND, and Dustin Vedbraaten of McIntosh; three brothers, Roger (Edith) Vedbraaten of Fosston, James (Renae) Vedbraaten of Thief River Falls, MN, and William Vedbraaten of Gully, MN; 11 grandchildren, Chase, Jade, Ruby, Ariana, Lucian, Jake, Aubrie, Gage, Easton, Lyla, and Carly; great grandchild, Logan; sisters-in-law, Lorraine "Lolly" Miska of Crookston, MN, Lynn Fallik of Houston, TX, Karen Vedbraaten of Lengby, MN, and Sharrie Janovick of Superior, WI; and brother-in-law, Kevin Wildes of Sun City, AZ. Nieces, nephews and cousins also survive.He was preceded in death by his parents; brother, Ron Vedbraaten; grandson, Logan Vedbraaten; sisters-in-law, Lynda Vedbraaten and Deborah Wildes; brother-in-law, Scott Young; and several aunts and uncles.

To order memorial trees or send flowers to the family in memory of Mark Vedbraaten, please visit our flower store.