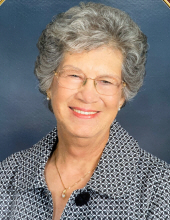 Mary Roysland, age 86, of Fosston, MN, passed away on Friday, August 16th, at Essentia Health Hospital in Fosston. Funeral services will be held at 10:00 a.m. on Tuesday, August 20th, at Kingo Lutheran Church in Fosston with the Rev. John Ragan officiating. Interment will be in Landsverk Cemetery, rural Fosston. Visitation will be held from 5:00 p.m. to 7:00 p.m. with a 7:00 p.m. prayer service on Monday, August 19th, at the Carlin Funeral Home in Fosston. There will also be reviewal for one hour prior to the service on Tuesday at the church. Arrangements are with Carlin Family Funeral Service and messages of condolence may be sent at www.carlinfuneral.com. Mary Jean Sinjem Roysland was born on May 19, 1933 in Fosston, Minnesota to parents Ole and Emma (Blanchard) Sinjem. She grew up in Fosston and graduated from Fosston High School in 1951. After high school she attended beautician school in Fargo, North Dakota. She was united in marriage to Robert James Roysland on January 24, 1954 at Carmel-by-the-Sea, California. At the time of their marriage, Bob was stationed at Fort Ord Army Base. They lived in Seaside, California until 1955 when they moved to Erskine, Minnesota. While living in Erskine, she operated Mary's Beauty Shop out of her home. In 1968, they moved to Fosston and built a home north of town where they raised their family and worked together on their farm. Mary was truly a servant and a caregiver. She served as a beautician at McIntosh Senior Living, Essentia Health Living Center, and Carlin Funeral Home for many years. She was an active member of Kingo Lutheran Church, serving on numerous groups within the church. She also volunteered for the American Diabetes Association and other organizations in the community. Mary loved to follow, support, and cheer on all of the sports teams that her family and friends participated in. Mary loved to mow and take care of her yard meticulously which she took great pride in. She will be remembered for her undying faith, her positive attitude, gentle nature, and the love she shared with her family. The times she enjoyed most were times spent with family and friends.Mary passed away peacefully on Friday, August 16, 2019 at Essentia Health Hospital in Fosston at the age of 86 years.Survivors include her son, Mike (Kim) Roysland of Fosston; two grandchildren, Kelly (Eric) Roysland Curry of Minneapolis, MN, and Josh Roysland of Minneapolis; great grandson, Brekken; sister-in-law, Bernice Roysland of Fergus Falls, MN; and George Reck of Aurora, MN. Nieces, nephews and other family members also survive.She was preceded in death by her husband, Robert, on July 13, 1992; two children, Patricia Roysland and Roberta Reck; grandson, Eric Reck; her parents; two sisters, Kathleen Nelson and Patricia Sinjem; and brother-in-law, George Roysland.

To order memorial trees or send flowers to the family in memory of Mary Roysland, please visit our flower store.