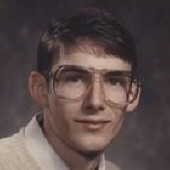 Matthew Theis, age 45, of McIntosh, MN, passed away on Friday, June 5th, at his home in McIntosh. Funeral services will be held at 11:00 a.m. on Tuesday, June 9th, at the Carlin-Hoialmen Funeral Home in Fosston with Father Dave Super presiding. Interment will be in St. Mary's Catholic Cemetery, Hansville, rural Fosston. Visitation will be held for one hour prior to the service on Tuesday at the funeral home. Arrangements are with the Carlin-Hoialmen Funeral Home of Fosston and messages of condolence may be sent at carlinhoialmen.com.Matthew James Theis was born on November 11, 1969 in Fosston, Minnesota to parents Robert and JoAnn Randall Theis. He grew up in McIntosh and graduated from Win-E-Mac High School in 1988. Following high school, he went on to attend Northwest Technical College in Bemidji, Minnesota. After his graduation, Matt took a position at Erskine Manufacturing and later at MDV in Fosston. He was forced to stop working due to health issues. Matt enjoyed shooting pool, fishing, hunting, and farming with his brother, Mike. He also enjoyed simply cruising the back roads all around the area. Matt enjoyed the simple things in life and had a good heart. He would gladly lend a helping hand to anyone in need. Survivors include his father, Robert of McIntosh; his grandmother, Helen Randall of Fosston; five siblings, Michelle (Arthur) Olson of Stirum, ND, Mary (James) Olson of McIntosh, Deborah (Wesley) Svalen of Oklee, MN, Michael (Lori) Theis of Fosston, and Kristie (Cheyenne) Kingbird-Theis of McIntosh. Nieces nephews and cousins also survive. He was preceded in death by his mother, JoAnn; brother John Paul Theis; maternal grandfather, Elmer Randall; and paternal grandparents, Andrew and Agnes Theis.Honorary Pallbearers: All nieces and nephewsActive Pallbearers: Wesley Magnell, Mark Theis, James Nichols, Cody Olson, Cheyenne Kingbird, Daniel Svalen, and Benjamin Theis.

To order memorial trees or send flowers to the family in memory of Matthew Theis, please visit our flower store.